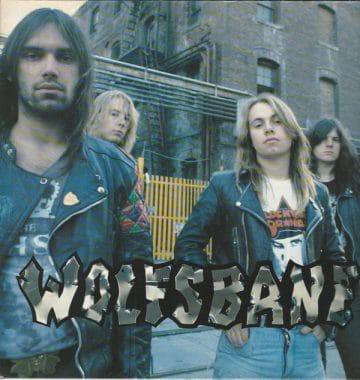 Review:
The first time I heard Wolfsbane was on a late night music video show that played a selection of metal and hard rock clips for about an hour at three in the morning. I would usually set the video cassette recorder to start recording half an hour earlier, just to allow for any short power outages, so that I had a better chance of recording the full hour for watching later on in the day. The Wolfsbane clip was for the song “I Like It Hot” and I remember enjoying it enough to make a mental note to purchase the CD whenever I saw it available. “I Like It Hot” was quite catchy, had some great guitar work and had a memorable chorus. Best of all, the guys in the band didn’t look like girls. In fact, the lead singer looked like an unshaven brute, giving me the impression that the band was made up of a bunch of dirty beer drinking hooligans. To top things off, the lead singer sounded a little bit like David Lee Roth, which in any music fan’s book, gets the band some bonus points.

Live Fast, Die Fast opens with the fast paced “Man Hunt” which doesn’t let up from start to finish. A simple quick riff and frantic drumming drives the song along to great effect. Short bursts of double kick drum, which sound like they have been tracked in separately to the rest of the kit, fit nicely in the chorus and break up the monotony of the punk like tempo. The first of many great guitar solos found on the album by Jase Edwards is presented here and is full of speedy scale runs and squeals.

Next up we have “Shakin’” which is another straight up rocker. The song starts with a groovy mellow finger picked riff before bursting into big chords. There is some nice guitar harmonics filling the transitions between the verses and bridges, in additional to another great guitar solo that pulls out all the tricks. After the solo there is a short midsection breakdown which slows things right down before building up again for a climactic ending. To top things off, Blaze Bayley successfully croons the sleazy innuendo filled lyrics in his tough unpolished style without coming across too comical.

“Killing Machine” follows with another cool riff and some unrelenting verse double kick drum that only transition to a simpler beat during the choruses. Annoyingly, there are short bursts of mechanized snare drum hits, which similar to the kick drums in “Man Hunt” appear to have been tracked in separately to the originals. Even if the snares were the original tracks and the sound was manipulated later on, they are just terrible and too fake for a rock song. Saying that though, “Killing Machine” is one of my favorites even if it has one of Jase’s worst guitar solos. With a title like “Killing Machine” I would have expected a blistering solo however what we get here is a subdued and messy affair that comes across more like random noise than anything else. The real saving grace on this song though is the verse riff and the complimentary double kick drum which I just love.

“Fell Out Of Heaven” has an intro riff containing some guitar trickery in the form of squeals and bends before moving to a mid-tempo chugging verse. In an interesting move, the song title lyric is used in what I will deem as being the bridge, and effectively adds a slight build up to another great and catchy chorus, which itself raises things to another level. We get another helping of sexually fueled lyrics and a great guitar solo, one which would have served better on “Killing Machine”.

Next up are “Money To Burn” and “Greasy” continuing the straight up rock vibe that has been present since the start of the album. Wolfsbane might not be flashy, but they know how to get the job done and seem to purposely ensure that the songs don’t stick around too long to become mundane. Saying that however, the drum beat, or more specifically the snare on “Money To Burn” is repetitive and doesn’t vary all that much. I will attribute this to the albums mix which I will get into later on. In contrast, “Greasy” is a great song and another of my favorites. The transition of riffs is just superb and a great example of how to get a song to flow along effortlessly.

“I Like It Hot” as mentioned previously was the first single released from the album and as far as I am aware, was the only single. It is a fun song about good times and has a bouncy groove making it instantly accessible and memorable. The chorus is catchy and Blaze’s vocals really shine throughout all sections especially the chorus. I agree that it was the most logical choice for a single out of all the songs on the album. “All Or Nothing” is up next and returns us to full tilt rock. In fact, you could actually term the phrase ‘speed rock’ because that’s what most of Wolfsbane’s songs feel like. If it wasn’t for the topic matter of the lyrics, the band would be bordering on thrash most of the time. “All Or Nothing” much like “Man Hunt” has a punk attitude to it and includes a great group chant chorus.

“Tears From A Fool” follows and is the longest song on the album. Naturally of course it had to also be a ballad. Once again, if you have read any of my previous reviews, you will know that I am not too fond of ballads. This one though, I actually like. The song is nicely strummed away in a calm manner and has some nice lyrical arrangements. Things are broken up by sections of booming overdriven guitar and a great culminating ending. I better stop with the praise now because I have a ballad-bias reputation to uphold. The final song on Live Fast, Die Fast is “Pretty Baby” and takes us out exactly the way the album started — more speed, more riffs, more pounding drums and a great solo.

When Wolfsbane released their debut album in 1989, they were in direct competition with a lot of new upcoming bands who were also releasing their debut albums that same year. Bands such as Skid Row, Danger Danger and Extreme were being featured prominently on shows such as MTV and some of the already well established bands such as Aerosmith, Alice Cooper and Mötley Crüe were releasing some of the biggest hits of their careers. In essence, being an English band, Wolfsbane were overshadowed by the polished and produced Americans, and were ultimately a small fish in a big pond.

Things weren’t helped much by Rick Rubin (Ruin!), who in my opinion did a dreadful job recording this album. This is the same guy who had previously recorded Slayer’s Reign In Blood and South of Heaven, The Cult’s Electric and Danzig’s debut. Did he even do anything in the studio for Live Fast, Die Fast? Wolfsbane’s songs were great in your face rock and even though I like my music raw and edgy, Rubin could have made the album sound more powerful and bombastic giving the American bands a run for their money. Unfortunately, the album sounds flat — there is hardly any bass or low end in the mix and the drums are all snare, with the kicks also too far back in the mix giving them no definition.

I have a love / hate relationship with this album. I play it regularly because I love Wolfsbane and believe they were underrated. But I also hate the way it sounds. Luckily, the band turned to Brendan O’Brien to produce their follow up, which has a much better and bigger sound.

Video for the Wolfsbane song “I like it hot” from the album “Live Fast, Die Fast”. Howling Mad Shitheads UNITE!!