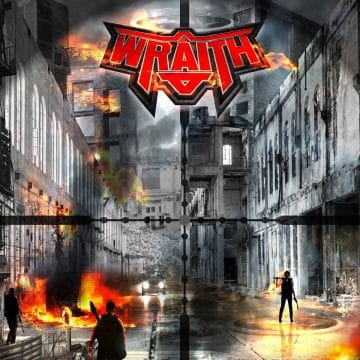 Review:
A couple of months ago, a friend of mine and I were chatting about which albums that we really liked that had been released in 2017. The band name Wraith came up and frankly, I had never heard of them. I was told that they sounded very ’80s like and pretty similar to Ratt. I was sold right away and checked them out a few days later. I was impressed with what I heard, posted an article on Sleaze Roxx about them and purchased their new album Revelation. Since receiving the CD, I have selfishly been playing it without letting you — the Sleaze Roxx readers — know about one of the best albums of the year.

As it turns out, Revelation appears to be UK rockers Wraith‘s sixth studio album. The group started back in 1987 and released four albums before disbanding in 1998. Another album followed in 2006 before the group regrouped for its 25th year anniversary in 2012. While I do hear some Ratt influences in many of Wraith‘s songs on Revelation such as on the bonus track “Hunted”, Wraith are definitely not clones of Ratt in any way. If anything, Wraith‘s songs are for the most part faster paced and slightly heavier than Ratt, and singer Ryan Coggin‘s cleaner voice won’t be mistaken for Stephen Pearcy‘s raspy delivery anytime soon.

The standout tracks on Revelation are the album opener “Lifeline”, “No Respect” and “Invasion” with the latter’s simple chorus likely to stay embedded in your mind for some time. The one weak track is when Wraith slow things down on “Leaving Me Again” which sounds like a pretty generic ’80s type ballad. I say “one weak track” because most of the songs on Revelation are good to great ones. The guitar sounds are very ’80s like and funny enough, the melodies at times remind me of Tales From The Porn‘s debut album H.M.M.V., which is another record that borrows heavily but very successfully from the ’80s. Bottom line is that if you like ’80s hard rock and heavy metal, odds are that you’ll really enjoy Wraith‘s album Revelation.