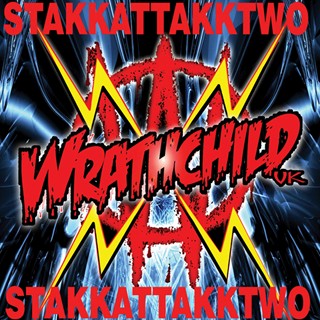 Review:
What we have here is a great sleazy rock ‘n’ roll album with lots of attitude from England’s hair metal ‘quireboys’ Wrathchild. You may remember the band’s 1984 debut Stakk Attakk, but this is Wrathchild in the modern world with their first studio album in over twenty years and a great new singer named Gaz Psychowrath. The music on Stakkattakktwo is extremely powerful with the same type of anthemic songs that made the original version of Wrathchild so great and the album itself is a rockin’ comeback that holds nothing back.

The opening track “Goin’ Down” is a great hard rock track full of attitude that will seriously make you throw your fists in the air and start headbanging. “All About U” follows and is a fantastic ’70s glam styled song with the typical Wrathchild twist — including some synth and even a piano during the guitar solo. This one is another great song and proves that Psychowrath‘s voice gives the band a more powerful edge. “Cherie Cherie” is my personal favorite on the album, it is a very ’80s sounding track with a great melody, fantastic guitar work and dazzling solo — absolutely beautiful. “Trikk Or Treat” is another rocker that could be called an anthem — it has a great riff, a fantastic hook, and is sleazy to the core. “Hollywood Or Bust” is the longest track on Stakkattakktwo but has great guitar work, perfect solo and great melodies both vocally and musically.

The second half of the album kicks (or should that be ‘kikks’?) off with “Nice ‘N’ Eazy”, a song drenched in sleaze that has an ’80s era KISS vibe, pounding drums, and ear shattering guitar work. “White Hot Fever” is another sleazy song that has a Van Halen feel about it and is a great rockin’ track that has lyrics about a woman that you want to leave but you can’t help but come back to night after night. The ’80s KISS sound returns on “I’ll Be Your Rokk N’ Roll”, yet another anthemic rocker that has a great riff and some excellent lyrics — and right before the solo you get a sweet bass line from Marc Angel. When you reach his part of the album you have a hard time believing that Stakkattakktwo is actually a newer release. “Bad Billy” is another good-time rocker with a great hook and you’ll find it getting stuck in your head, while “I Luv The Night” is a high energy, balls-out rock ‘n’ roll song — it’s clear from the first chorus as to why the boys in Wrathchild start their live shows with this song. The album closes with “Psychophantic Suicide”, a song that needs to be mentioned because it is the first ballad Wrathchild has ever done — but it’s not your typical cheesy ballad. Instead it is a slower song about your mortality and brings the album to a calm, epic close, and is one of the most beautiful songs I have ever heard.

Stakkattakktwo is a great release from start to finish from a band that is often criminally overlooked. I highly recommend this album to fans of old Wrathchild and people who have never heard the band before. This album, which is available via Perris Records, is one that will not disappoint. This is the best record Wrathchild have put out, and I’m a longtime fan.