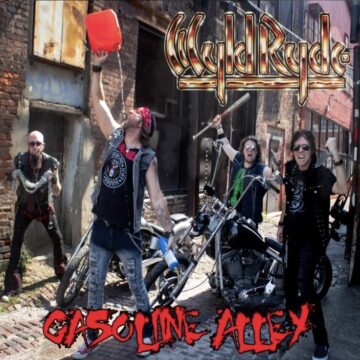 Review:
Well, it should be of little surprise that an independent band released EP from a little known band (at the moment) hailing from Louisville, Kentucky would be the tickler of my aural cavities, even though a nod or two must be given to Olivier for his initial posting of their video dropping and my friend Alpha Male for clueing me in on this must hear OR (Martinsane‘s) unknown and must own hard rock four piece, calling themselves Wyld Ryde and their sophomore EP Gasoline Alley.

A little history lesson on Wyld Ryde is warranted. Wyld Ryde were formed in 2017 and they released an EP called City Streets in 2018 which was subsequently re-issued in 2021 (both releases are unfortunately sold out as the 2018 was limited to 500 copies and the re-issue to 100). During these five (ish) years, the band has played out and cemented its stature as THE band to see (and hear) and its momentum continues into 2020 as they “ryde” the wave of the well-received accolades regarding Gasoline Alley.

The album title track starts on high with a rocker that has all the obvious, yet greatly appreciated, nods to Mötley Crüe‘s “Live Wire” and “Red Hot” (in the outro chorus), with an equal part Metallica‘s “Jump In The Fire”, while still remaining a fist pumping, adrenaline fueled original rock n’ roll song. Tommy‘s solo is a dinger and bonus points if you can name the Skid Row song that inspired it. It’s a real solid opener and sets the bar quite high. “Hold On Me” crashes in with a monster riff ripped right from Diamond Head‘s “Am I Evil” and then Chief‘s voice is oh so Udo like in his wailing of “You ain’t got” that it is almost eerie. The bridge between the solo and the outro chorus is one of my favorite parts of this song and the song itself is currently numero uno for me. It’s a real crushing hard rocker with huge gang vocals and slathered from head to toe with swagger.

“Alone” is next and it’s a more subdued, cigarette lighter, arena rocker with its “Frankie died just the other night” (“On With The Show”) inspired guitar progressions and Chief‘s “You Can’t Kill Rock And Roll”, Ozzy inspired vocalizing until the mid-point of the song and Tommy‘s solo layered over the galloping “Hit The Lights” / “Four Horseman” riffage, only to be juxta positioned back to where we came for the last chorus. Quite a nice number that certainly showcases (or cements what we have seen thus far) the musicianship the band possesses. “Six Gun Shooter” thrusts us right back into the Metallica meets Accept hard rockers that seem to be the comfy spot for Wyld Ryde, and this time we get precariously close to a Metal Church “Start The Fire” intro riff. This one has a period specific double bass drumming provided by Kidd and sees Chief again incanting Udo and early Vince Neil, and lest not sleep on Tommy‘s solo that is super tasty with its hammer on’s, that is oh so familiar but I just can’t place it… I will say that as the last chord rang out, an opportunity was missed to drop in a number of different (yet similar) influential songs.

“Come & Go” is apparently a cover song from Juice WRLD and Marshmellow (sorry kids, I am middle aged and the only Marshmellos I see are in my Lucky Charms). After immersing myself in Wyld Ryde‘s tastefully done cover, I did venture over to the original and I can see why Wyld Ryde took to it and how the song translates into an arena rocker. Why, even those not with their fingers on the pulse of pop culture could appreciate a good, well written song. “Don’t Say No” is the album’s closer and it is another in the stable of up-tempo hard rockers with its “Mob Rules” (or maybe “Speed At Night”) intro, “Trapped Under Ice” bridge and second solo, and the obvious “Kickstart My Heart” ending.

I am sure there are many more influential nods and Easter eggs abound in this EP that I may be missing, but that just affords more spins and who knows, perhaps a Q&A with the band where we go down that rabbit hole. Some listeners, I am sure, will try and inflate their egos by knocking on Wyld Ryde and their obvious influences. To them, I say two things — shame on you and what have you done? I for one (and I know I am not alone in this opinion) appreciate the band members’ influences and their inclusion of said influences in their original material. For fricks sake, Led Zeppelin was a cover band and ripped many artists to craft their “signature sound.” So do yourself and Wyld Ryde the courtesy of appreciating their efforts, grabbing a CD and a t-shirt because we need bands like Wyld Ryde just as much, if not more than they need us. Another suggestion would be to seek out the band’s Def Leppard “Hit And Run” cover as it’s a really well done version, not straying from the epic original, but certainly adding the Wyld Ryde signature.

Reviewed by Terry Martinson for Sleaze Roxx in April 2022