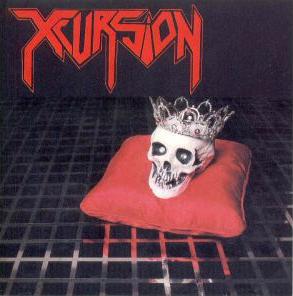 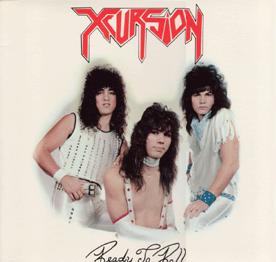 Review:
This release is actually a combination of Xcursion‘s 1983 debut EP and 1984 full-length album Ready To Roll (and both originally released on Rampage Records and highly sought after), put together on one compact disc. This Las Vegas trio is remembered mainly for being Mark Slaughter‘s first band — and of course he would later go on to huge glam success with the Vinnie Vincent Invasion and Slaughter. But don’t expect to hear music like that on Ready To Roll, as these early releases are fairly raw and show a young band trying to find their footing.

However songs such as “Ready To Roll”, “Over The Edge”, “Tear It Down” and “Solid As A Rock” are cool rockers. The final four tracks are from Xcursion‘s 1983 EP and almost have an Iron Maiden meets Odin sound going on, if that is even comprehensible! Please keep in mind that this is an early 80’s independent release so the production is lacking/dated at times, but it is an interesting release to observe where Mark Slaughter has come from. Ready To Roll is a very neat collectable for Slaughter fans, and early 80’s hard rock fans in general. Xcursion may not hit all the right notes, but it is an interesting release and receives two thumbs up!