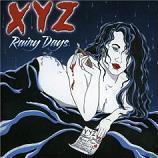 Review:
Before I get into reviewing this album, it requires a bit of background. Rainy Days itself isn’t an official XYZ release, it’s a collection of demo tapes from 1985 which has been released by guitarist Bobby Pieper, who recorded the said demos with the band. This album prompted vocalist Terry Ilous to release Forbidden Demos 1985/1991 which contains some of the songs found here.

The quality itself isn’t altogether too bad. Terry Ilous has said in many interviews that the quality of this CD isn’t good at all and that it’s cheating XYZ, however considering these are supposed to be lossy demos, the quality stands up to other albums of the same era. The CD itself contains a mixture of songs, including the ‘original’ version of “Souvenirs” which would later be re-recorded for XYZ‘s self-titled debut. Other songs such as “High Life” and “Lonely Without You” are good solid rock songs, the latter being a marginally better version than found on Forbidden Demos 1985/1991. There are some surprisingly weak songs by Ilous‘ standards (“Dynamite” and “You Belong To Me”), and it’s no surprise these songs made neither a record nor Forbidden Demos.

Rainy Days is a mixed bag, and even hardcore fans are drawn to a difficult decision. This record is ultimately only going to appeal to hardcore XYZ fans to get a taste of the band’s earliest days. However, by purchasing the record they’ll be lining the pockets of someone who has stolen both the XYZ name and demo tapes which do not even belong to him. Thankfully the best songs off Rainy Days can be found on Forbidden Demos 1985/1991, which also contains demos with Marc Diglio.

Reviewed by Bumpy for Sleaze Roxx, May 2007.