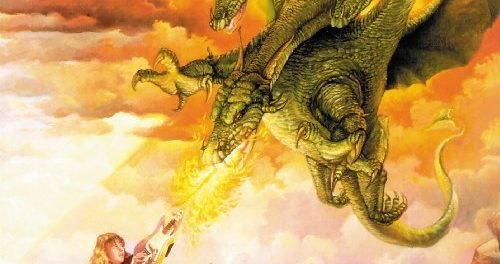 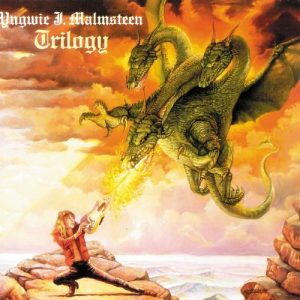 Review:
It had been sometime since I had listened to this album. I was astounded that it had been thirty years since its release. I was thinking back to my initial purchase of this album.

Being that I was only 12 years old, my only means of transportation was my reliable bicycle. At the time I lived in Ajax, Ontario, Canada, which was much smaller than it is today. So my only means of buying music was to go to the Woolco department store. So off I went, on my bicycle, to Woolco and purchased Yngwie J. Malmsteen’s Trilogy album. I couldn’t wait to get this album out of the store and removed from the long box packaging. The minute I walked out in the parking lot, the packaging was off and into my Candle Walkman. I then proceeded, on my bicycle to Burger King, where I ordered a Whopper combo and listened to my latest purchase while I enjoyed my Whopper, fries and swamp water (for those who don’t know, a mixture of every pop combined).

I would listen to this album on a regular basis and became quite familiar with its content. Until one day, a Coke Classic would forever ruin my copy of this masterful piece of ’80s hard rock. I was devastated, considering all the hard work I had put into owning it in the first place. Many hours of delivery and collecting money as a Toronto Sun paper carrier was my means of purchasing the heavy metal albums I so desired. It would be a few years before I would reacquire this album again, but by that time, I had moved on to so much more music and my collection had grown significantly, so it was purchased, but would sit on my tape shelf waiting to be listened to for years to come.

So here we are — November 4, 2016 — the exact day of the release 30 years ago. I pop it into my CD player. The first chords of “You Don’t Remember, I’ll Never Forget” immediately jaring my memory to that fateful day many years ago at Burger King. I think to myself about the title — “You Don’t Remember, I’ll Never Forget” — very clever title indeed. The music automatically has me drawn in. It sounds very neo-classical influenced with a heavy rock edge. I find the guitar to be a little thin, but it is Malmsteen’s signature single coil pickup Fender Stratocaster with scalloped neck sound that he has built his career on.

The first track no matter how I feel about the production is a great track. The vocals of singer Mark Boals are powerful and executed precisely. This being the first album for Boals and the fact that seven of the nine tracks feature vocals impresses me. Yngwie is great at not only music composition, but at writing memorable vocal hooks. The two previous releases (1984’s Rising Force and 1985’s Marching Out) by Malmsteen featured vocalist Jeff Scott Soto on the odd track with these albums being primarily instrumental.

The next track “Liar” does not disappoint. It follows the same formula featuring a great catchy chorus with superb musicianship. Underlying in these tracks is the keyboard playing of Jens Johansson who is an integral part of the Malmsteen sound. In some senses, his keyboard playing reminds me of a spoken chant reminiscent of something from the 18th Century. Drummer Anders Johansson drives the beat throughout with very fast footwork on the double bass. “Queen In Love” is a memorable cut that is very medieval sounding, which fits in nicely considering the cover of the album features Malmsteen fending off a three-headed dragon with his guitar. The rhythm guitar drives the intro and I find Malmsteen’s rhythm playing to be very tight throughout. I also enjoy his melodic portions of the solo leading into his fiery fast playing in the second section of the solo. Many say he does not feel what he is playing, but I find there to be quite a bit of feeling.

“Crying” is the first instrumental of the two. I am very impressed by Malmsteen’s very light classical acoustic playing in the first portion of this song. The bass, also done by Malmsteen, is more predominant than on the previous tracks and drives the song. The next few tracks “Fury,” “Fire” and “Magic Mirror” are all in the same vein. These songs follow the Trilogy format and direction. “Fury” and “Fire” may very well be the most pop metal tracks on the album, but within the restraints of what Malmsteen is conveying on Trilogy. “Dark Ages” is another medieval track that conforms to the album cover. There definitely is a theme being construed throughout the album. “Dark Ages” is somewhat of a slower number, but not in a ballad sense. It is a slow mystical groove track where the keyboard is hitting stride with the drums. The album closes with the second, and last instrumental track “Trilogy Suite Op. 5” where Malmsteen showing his love of classical music, naming it as it had been done previously by Bach or Beethoven. This track begins with Malmsteen playing lightning fast sweep licks. This track is an emotional musical rollercoaster, varying in different spots throughout the song. This composition changes tempos, going soft and sweet then coming in hard and heavy.

As I summarize this album, I wonder if this is something that I would listen to on a regular basis. I am not sure that I would. I am older and wiser. My tastes have changed, but I thoroughly enjoyed listening to an album from my past. Knowing what I know now musically, my appreciation for this album is not denied. It’s just not my cup of tea these days. For fans of this style of neo classical metal played lightning fast, this album is a must. I just feel that it has not stood the test of time and may very well be stuck on my CD shelf for another ten years.