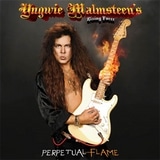 Review:
When you get a new Yngwie Malmsteen album you pretty much know what to expect of it, wicked guitar playing by the maestro himself, a strong lead-singer, muddy production and sometimes even two or three good songs. There has been quite a lot of discussion about whether Tim “Ripper” Owens would manage to step into the mighty big shoes of former Malmsteen frontmen like Joe Lynn Turner, Mark Boals or Goran Edman. While those guys were clearly rooted in the hard rock territory, Owens‘ history as the lead-singer of Judas Priest and Iced Earth leads people to believe that Malmsteen‘s newbie would turn out to be quite heavy.

And Perpetual Flame definitely is heavy. The opening double hitter consisting of “Death Dealer” and “Damnation Game” surprisingly leans more towards what Judas Priest did around in their Painkiller days than Yngwie‘s old stuff. Unfortunately those two songs lack any remarkable hooks, like almost every song on Perpetual Flame, and Owens‘ voice is buried somewhere in the expected muddy production. Once again the focus of the whole record lays much too much on Yngwie‘s guitar playing and not on the nine songs (add to that three uninspired instrumentals) themselves. Sure, Malmsteen is still on top of his game when it comes to laying down over-the-top solos with a neo-classical feel, but hardly any choruses will be stuck in your head after several listening sessions.

“Red Devil” is an alright mid-tempo stomper and “Priest Of The Unholy” has an interesting song-structure, but that’s pretty much it.

As much as I like Ripper Owens‘ voice, I just don’t think it really fits with Yngwie Malmsteen‘s songwriting. The whole disc offers little variety and the muddy production doesn’t add to the listening pleasure. All in all Perpetual Flame is a typical Yngwie Malmsteen record, either you like him or you don’t.