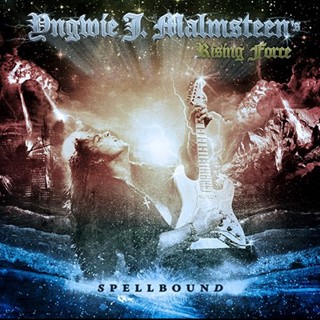 Review:
Spellbound is Yngwie J. Malmsteen‘s 19th studio album, and possibly his best work.
If the great composers of all time, from Mozart to Bach, were ever to resurrect and give a listen, now would be the perfect time.

Yngwie Malmsteen is a man who needs no introduction.
The guitar virtuoso has come a long way since his days with Steeler and Alcatrazz and the ‘Swedish Viking’ is at it again, and certainly delivers, on Spellbound. “Spellbound”, the album’s first track, sets the tempo for what’s about to transpire throughout Malmsteen‘s latest collection of music — going in and out of passages between classical and classic metal, one would associate this song to what it would sound like entering Valhalla.
The Swedish virtuoso shows the brilliance of his musical talents (he plays all the instruments on this album) by not only going back and forth between styles, but also showing his ‘bluesy’ side that comes out in tracks like “Let Sleeping Dogs Lie” and of course “Iron Blues”.


Comparing Spellbound to Malmsteen‘s past works such as Perpetual Flame would be somewhat unfair. In terms of his guitar playing style, I feel that there’s more riffing and less scales on this album. But I also find that there are certain similarities between Yngwie‘s past work, such as Rising Force and Trilogy, as this new album delivers an ’80s influence with more rounded guitar playing. I believe Malmsteen has gone back to see what he could absorb from his past work and applied it to Relentless, and now Spellbound.

“Repent” finds Malmsteen displaying his vocals, and it works rather well with the style of classical metal represented on this particular track, but it could be considered filler by the guitarist’s standards. Another song I feel is substandard is “Nasca Lines”, although the interesting aspect of this track is that Malmsteen introduces yet another guitar style to his repertoire — ‘Flamenco’. “God Of War” is possibly my favorite with its classic guitar intro leading into heavy drumming before drifting back into classical guitar. The flowing of guitar passages and hard pounding skins, that travel back and forth, form a charismatic style of both heavy and melodic, combining to form an orgasmic feeling.

I think, and how could I not, that Yngwie represents (in terms of feeling) every track he plays on, demonstrating both Dr. Jekyll and Mr. Hyde elements. Yngwie Malmsteen is an extreme guitar player and brings out his inner feelings to the max through his instrument. His talent, of indescribable proportions, is bewildering, and while we all know he is very controlling he did manage to thank his fans on this album. Spellbound is for every guitar lover, of every kind of music — so grab a beer or a glass of wine, or whatever you desire, kick back, and take it all in.