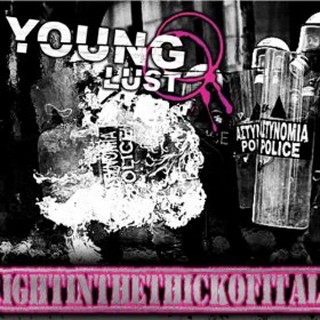 Review:
Young Lust are a UK based four piece hard rock outfit who recently released a new EP called Rightinthethickofitall. I’ve seen the band live twice now, once supporting the Donnie Vie Band and more recently on tour with Enuff Z’Nuff, and both times I’ve been genuinely impressed, plus they’re a decent bunch of blokes who clearly enjoy what they do — on and off stage.

Rightinthethickofitall is a really decent EP and if this is a taste of what we can expect on a future full-length CD release then I’m genuinely excited about this band. The production on this CD is great, the mix and clarity do the songs justice throughout, the title track “Right In The Thick Of It All” and “Let It Go” are both solid hard rock melodic tracks best listened to with some volume behind the heavy riffs whereas “I Can’t Give You” shows a more melodic side to the band with a great ballad that steps down brilliantly in the pre-chorus.

Young Lust have a lot of potential, I do hope they keep going at this as they seem passionate about what they do. If I could make a few improvements I’d love to have heard more harmonies throughout, particularly in the title track chorus and there were a few places where I thought a key change would have made the songs really killer and added originality. I’d love to hear rough demos of what they plan next as they’ve already shown their song writing ability is really strong on this EP.

Rightinthethickofitall is well worth picking up as Young Lust are already making a name for themselves as a recognized quality act doing the UK circuit and with more exposure I reckon they could be around for some time. Be sure to make the effort to go see them live when they hit a town near you in future.