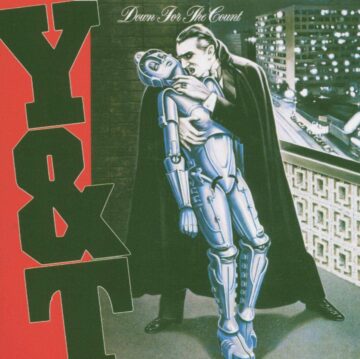 Review:
What is interesting about Y&T is that they are a band that can fit into many different camps. They have the look of a glam band, the feel of a blues/rock band and the grit of a heavy metal band. The band is underrated to say the least and should’ve been bigger than they were. Y&T’s Down For The Count is their seventh studio album released in 1985, which turned out to be the last album consisting of the original line-up of Dave Meniketti, Joey Alves, Phil Kennemore and Leonard Haze. Peaking at #91 on the Billboard 200, Down For The Count is a solid piece of work that deserves more attention than it got.

Kicking off this album is “In The Name Of Rock”, which pulls us in with the echoing intro. Right off the bat, I love the guitar work in this song along with the cadence of the verse. I like to call the effect that Y&T use in a lot of their songs the “echo” effect. What I’m talking about is when you get the background vocals, commonly in the chorus, and you get that loud echo as if you’re listening in a big cave. Maybe I’m just ignorant on the production term, but I’ll go with “echo” from here on out. Anyway, the pairing of Meniketti’s vocals with only the drums was a very cool element, along with the bridge around the four minute mark. This track is a strong piece of work to get us engaged.

Up next is “All American Boy”, which is a simple, goofy song. I don’t mean that in a bad way, because I still enjoy it. Aside from the glam style Y&T bring, the lyrics and mood remind me of something in the Americana realm. It’s really a cool thing to bring to this style and I dig it. Following “All American Boy” is “Anytime At All.” There is a fantastic riff at the beginning, but I can’t get the keyboards out of my head. Now, I understand this was the ‘80s and the keys were “in”, but I’ve never been a big fan. I feel like Y&T would be a lot grittier and stronger without the added keyboards. Regardless, the song is still pretty good. Definitely not their strongest work, but still a pretty killer song.

“Anything For Money” is a great uptempo song song that gives us that “chugging” effect thanks to the fantastic drumming from Haze. The fills and heavy pounding give a real intense feel to this track, also aided by a blistering guitar solo and riff throughout. Following that is “Face Like An Angel”, which is pretty mellow compared to the last four tracks. To be completely honest, I’m not a very big fan of this song. I can take or leave the slowness, and I just find myself kind of bored. Not terrible by any means, but definitely one of my least favorites.

Track six is Y&T’s biggest song, not only on this album, but of their entire span as a band. “Summertime Girls”, whether you think it’s too much of a pop song or not, is a fun jam that will get you singing along every time. With its catchy chorus, this is definitely a guilty pleasure of mine. “Summertime Girls” was released as a single and reached 55 on the Billboard Hot 100, and should have been much higher. Up next is my personal favorite on the album, “Looks Like Trouble.” The bluesy guitar riff in the intro instantly pulled me in, and there was a great blues presence carried out throughout the rest of the song. This track grooves really well and gives us a great chorus that is loud and booming. The guitar solo is absolutely scorching, and the bridge following it builds us up very well to go back to the chorus. I have no complaints at all about this song.

The Loggins and Messina cover, “Your Mama Don’t Dance”, isn’t too bad. I mean, with a song like this, you get what you get. It’s fun to listen along to, and it is definitely better than Poison’s cover of the same song. “Don’t Tell Me What To Wear” is a silly, but rebellious song. The guitar work immediately stands out to me along with the intense chorus. I really enjoy this uptempo rocker, and would probably consider this one of my favorites on the album. Rounding out Down For The Count is “Hands of Time”, and this has always been a tough song for me to draw an opinion on. I love the cool spacey guitar intro, and it’s a very Pink Floyd sounding song instrumentally if you really listen hard. Aside from that, I’m not too into these slow power ballads concluding albums with mostly heavy songs. Nothing against the song, I just think it was placed in a weird spot.

Down For The Count is a great album overall, and I barely have any complaints about it. I have always been a huge fan of Dave Meniketti’s vocals and guitar playing, and it is showcased very well here. Y&T were not in the top tier of other ‘80s bands in popularity, but they could play with the best of them. If you are looking for a great rock ‘n’ roll album to throw on in the background throughout your day, this is a great choice.