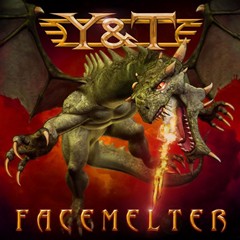 Review:
Facemelter is Y&T‘s first album since 2004’s UnEarthed Vol 2 — but it also marks the band’s first studio album in thirteen years, following 1997’s Endangered Species. Early press and interviews with frontman Dave Meniketti indicated that Facemelter would be one of the best albums Y&T have ever done — it’s not. Don’t get me wrong, it’s not bad and it happens to be good, very good in some parts, but it’s nowhere near the best thing they have done.

The opening number “Prelude, On With The Show” has some great Meniketti fret work — it is really distinctive when you know what you’re listening for and really builds up a good vibe, that is until the voice over starts and spews a lot of crap. This would have worked better as an instrumental like Black Tiger‘s “From The Moon”, there was nothing wrong with that one was there? Still, it moves us into the excellent “On With The Show”, which is a cracking number with a lot of signature Y&T sounds — Phil Kennemore‘s bass playing holds this together perfectly and it includes some good stuff by Meniketti — this is going to be a crowd pleaser if they bust it out live. “How Long” follows and is really plain and sounds like filler to me — with that said, it’s not a bad song, just by following the great “On With The Show” it is made to sound lackluster. “Shine On” is real grower, a real feel good song with a kick ass solo.

My first impression of “I Want Your Money” wasn’t exactly favorable, but upon multiple listens I really like it — it’s a tight number with some blistering Meniketti guitar work, and that can’t be a bad thing. “Wild Child” quickly follows, and for me is another filler song — it is slow, has low energy and doesn’t grab me in anyway. “I’m Coming Home” starts off like it’s going to be epic, but 16 seconds in that’s dispelled as this becomes more by the numbers filler. “If You Want Me” is your expected obligatory ballad that isn’t anything great, nor is it bad — it’s just there. Fortunately “Hot Shot” follows and the energy of Facemelter begins to build again. This song is a solid, if unspectacular, number that really picks up with a great solo. I enjoyed “Blind Patriot”, if in a narrow way, as it’s a busy number with a lot going on but needs a little something extra to make it stand out better. “Don’t Bring Me Down” starts with a nice acoustic riff, which is a cool change of pace, but then the electric riff starts in and off the band runs. This is a good solid track with a fair amount energy. The intro to “Gonna Go Blind” reminds me of a Monster Magnet number, but that’s where the similarities stop as this is far superior — an enjoyable little song that suffers from the annoying band chants of ‘Gonna go blind’. “One Life” finishes off the core tracks and starts with a really good bass line which would kick ass live, the riff also works well and this one really closes the album nicely. Since I live in Scotland my disc also has the bonus track “Losing My Mind”, which as would be expected, is simply alright. It’s a bit thin in places making it obvious why this song was only added as a bonus on the European release.

In summary, if you’re a Y&T fan you are going to buy this — if your not, then I suggest you listen to some previews and see what you think. Personally I think it’s worth your cash, it’s a good return from Y&T, but not a great one — and that’s a big difference. My overall opinion is that Facemelter has the feel of an early ’80s Y&T album but with a more modern sound, which would be expected, yet it doesn’t maintain this throughout and it’s a shame.