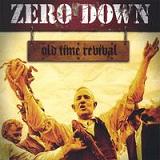 Production:
Produced by Zero Down and Martin Feveyear.

Review:
Oh no, a band from Seattle (that’s a dirty word in these parts) has sent me a CD to review. Actually it’s not so bad, I first heard Zero Down on the Perris Network compilation and thought their contribution, “Two Ton Hammer”, was the perfect mix of aggression and attitude. I love those two qualities in a band, but occasionally such an unrelenting attack can be overwhelming for the listener – and I envisioned Zero Down to be that type of band.

Luckily they aren’t, as they do mix the tempo up occasionally. The problem however, is that when they aren’t delivering music at fist pumping speeds they really aren’t that good. The middle of the CD is a bit of a letdown, it is essentially a punk hybrid with guitar solos.

What saves the disc are the incredible “In The Name Of Satan We Rock”, “Two Ton Hammer” and to a lesser extent “Pound For Pound” and “Kick It Down”. These songs have a vocal delivery that bounces between guttural growls and AC/DC inspired mayhem, and it works well. “Rock N Roll Kidz” is another great song, but I don’t agree with the chorus that states “rock n roll kidz must die”. If that happened who would read my reviews?

When Zero Down is on top of their game they kick all kinds of ass and few can match their pissed off aggression. Thankfully they mix things up so that the listener doesn’t feel bludgeoned, too bad their slower songs don’t work as well as their turbo charged rockers. Zero Down has the potential to be something fantastic, they just haven’t quite reached their pinnacle yet.