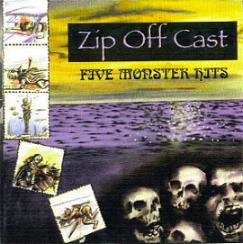 Production:
Produced and recorded by Zip Off Cast and M. Karpiac.

Review:
This is an album I never knew existed. Of course some of you may be wondering why I would even care about discovering a band named Zip Off Cast (which originally were known as Mad Reign). There is one simple answer to that question – Frank C. Starr. Yes, the same Frank C. Starr that copyrighted attitude with the massively under-acknowledged Four Horsemen. So imagine my surprise and excitement when I received an email telling me that one of the greatest front men in hard rock history actually recorded another album! I fucking near wet my pants.

But then I began to worry. What if there was a reason this album is unknown? Could Frank have actually been part of a disappointment? Needless to say I had my fingers crossed when Five Monster Hits arrived and found its way into my CD player. Then the opening bass-line of “19th Nervous Revolution” came on, sounding like Alice Cooper‘s “Gutter Cats Vs. The Jets” followed by a whimpering vocal. Oh oh, maybe my fears were justified after all. But then it happened, the chorus hit and Frank C. Starr was spewing venom just like I remembered.

This isn’t a Four Horsemen release as it is more experimental than they were with some slap bass patterns and interesting guitar leads. But the dual guitar attack and attitude is still there, and some of the songs could have fit comfortably on Gettin’ Pretty Good…At Barely Gettin’ By… For instance take “Faith” – it has that typical mellow intro before turning aggressive, balancing between both for maximum effect. The guitar crunch on “Tough Times” matches the vocals perfectly and reminds you of the type of pissed off anthem that the Four Horsemen made famous. “Political Prisoners” is the best song on the disc thanks in part to its sing-a-long chorus.

It is rare these days to come across something that you hadn’t heard, but also that you hadn’t even heard of. Tragically, just like the Horsemen, two fifths of this band has passed away. I guess the old saying of only the good die young is true, but it in this case it was the good – with bad attitudes.