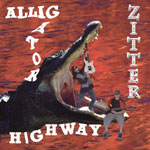 Production:
Produced and mixed by Zitter.

Review:
Upon falling on my desk, this release didn’t look very promising. A weird band name and a silly cover featuring a couple guys in unspectacular clothes looking WAY too happy. So imagine my surprise when I finally got around to spinning this disc and heard a classic rock band with a vocalist that has his Alice Cooper growl perfected! Lesson learned (again…) — never judge a book by its cover.

The third release from Zitter, Alligator Highway opens up with “Red House”, a Cooper style rocker complete with the occasional fuzz-box guitar effect. In fact by the time the listener reaches “Sunny Day Holiday” you start to hear some Monster Magnet guitar influences. “Antiseptic” and “The Change” are a two-part story involving a psychopath (can anyone say “Ballad Of Dwight Fry”?) that is actually damn good — dark and disturbing. For good measure, you in can even hear parts of Iron Maiden‘s “The Trooper” in “Charlie’s Inn”!

The slower songs such as “Naked” and “Believer” don’t really work however — they have a trippy Kik Tracee feel, but are fairly bland. Vocalist Fred wrote most of the material on Alligator Highway, and has proved himself a very capable lyricist — throw in B Gustaf‘s 70’s guitar approach and you have a cool album. Usually drum arrangements/machines bother me, but they aren’t even that noticeable here, so I have to recommend Zitter. You can find them at www.zitter.nu.