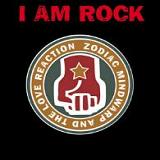 Review:
Over the years artists have christened themselves such things as the ‘King Of Rock ‘n’ Roll’ and the ‘Prince Of Darkness’, but such claims aren’t good enough for Zodiac Mindwarp. Instead he proclaims to be an entire genre! Few could seriously boast to be rock, but when Zodiac is on top of his game few can match him. I Am Rock may not be as great as the essential Tattooed Beat Messiah album, but it is close and finally returns this group of bottom feeders to the top of the hard rock heap.

Besides the lyrical poetry contained on I Am Rock, the music itself stands up as well. This CD is more riff oriented the most of The Love Reaction‘s work and makes for some catchy and memorable songs. “I Am Rock”, “The King Of Love”, “Fucked By Rock” and “20,000 Women” are all incredible tunes that should be concert staples. “Helsinki Motorcycles” is the only song represented here that left me cold, and even though “Jane In Blue” is a bit of a departure for these guys, it still works.

It’s great to hear Zodiac Mindwarp back in top form because he can rock as good as anyone. This band has gone unnoticed for far too long now and let’s just hope the upcoming album Rock Savage turns out as great as the seething I Am Rock. Fucked up music by a fucked up performer, this is what sleaze is all about. www.zodiacmindwarp.com.