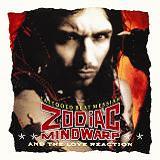 Review:
I clearly remember the first time I heard Zodiac Mindwarp And The Love Reaction. It was during a late night TV video show, and the song they played was “Backseat Education”. I watched in amazement as these greasy, long-haired, leather-clad bandits cheated at poker, stole the girl and proceeded to kick ass Bruce Lee style. To this day I still claim that “Backseat Education” is the greatest music video ever, a pure camp masterpiece.

The first chance I got I snatched up Tattooed Beat Messiah at the local record store and was never the same. Zodiac Mindwarp were cartoon characters brought to life, characters that were fueled by alcohol and drugs, that blew the heads off nuns, that treated women as sexual object, and that had the music to back-up all their over-the-top antics. If the 80s were the decade of excess, then Zodiac and company were at the top of the cocaine mountain.

“Backseat Education”, “Prime Mover”, “Skull Spark Joker”, “Planet Girl” and the other killer tracks sound as good today as they did almost twenty years ago. Anyone who claims to be a sleaze fan will likely pencil Tattooed Beat Messiah into their list of most influential albums, and for a short period of time the masses latched onto Zodiac‘s outrageous gimmick as well (the band broke into the Top 20 in the UK). But it was short lived and to this day Tattooed Beat Messiah remains as his crowning achievement.

Rock Candy Records have ‘remastered & reloaded’ Tattooed Beat Messiah, and have probably put more effort into this release than Zodiac ever did with his music. A 16 page booklet and all of the B-sides are included here, which prove that the band was truly out of their minds as they experiment with all sorts of sounds and ideas.

If you were too young to remember the debauchery of Zodiac Mindwarp in his prime, or if you want to upgrade your old cassette version, this CD is a must have. This is Zodiac at his demented peak, in fact this is sleaze rock at its best.