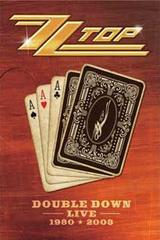 Review:
Before you call this ZZ Top collection just another live DVD, you must know what’s included on Double Down Live 1980 + 2008. Because even if you already own their other fantastic DVD Live In Texas, you’ll want to pick this one up.

First of all the first DVD on this double disc set is the uncut, legendary performance at Germany’s Rockpalast from 1980 when ZZ Top toured behind their Deguello album. As a ZZ Top enthusiast I have owned this on both audio and video form for a number of years, but sadly my copies have been passed around trading circles for ages and I sorely needed an upgrade. The footage looks its age and is spotty at times, but the audio is not surprisingly fantastic. You’ll be transported back to 1980 when ZZ Top were about to break into the mainstream. This still showcases the trio as an arena rock ‘n’ roll bar blues band, prior to the over-the-top 80’s excess and technologies that plagued the following albums throughout that decade. This is a treat for me as I never caught the band prior to 1983 live.

The second DVD on Double Down Live 1980 + 2008 was recorded from footage shot during their 2008 world tour in North America and abroad. I obviously see this as a bonus disc with the Rockpalast footage the main course. Much like ZZ Top‘s setlist since completing their contract with RCA, the songs on the 2008 DVD don’t add any surprises. I should add that the disc was stripped down to a mere 11 cuts, which leaves me asking the question; why?