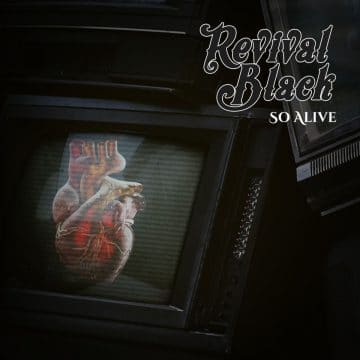 “Liverpool’s Revival Black, are delighted to announce that their new single “So Alive” will be released on Fri, 07 Jun 2019.

“So Alive” will be available worldwide, across all digital download and streaming services. It is accompanied by a lyric video by Studface Productions…

Singer, Dan Byrne, explains, “It has been a crazy time at RB HQ. We travelled to Ibiza to close the HRH Road Trip festival. Classic Rock have included our last single, “Wide Awake”, on their magazine cover CD. We opened the inaugural Call Of The Wild Festival. We were Top 3 finalists in Virgin Music’s ‘Manchester to LA’ competition and now TNT Wrestling have adopted our song “Hold Me Down” as their official event anthem.

“We want to keep that momentum going so we are thrilled to release “So Alive.” It’s a fast-paced straight-ahead rock song that we use to open most of our live performances.

It’s all about breaking free; about freedom about feeling ALIVE. What better way to start a rock concert? Leave your troubles at the door and lay it all out there, HARD!”

Following the addition of vocal powerhouse, Dan Byrne, the band have been revitalised and re-imagined, bringing a whole new attitude and drive that warranted a new name and fresh identity. Previously known as Black Cat Bones, “So Alive” is just the third single to be released under their new name of Revival Black and will feature on their forthcoming debut album out later this year.

Revival Black (previously known as ‘Black Cat Bones’) are a classic sounding hard rock band, striking out of the cultural heartland that is Liverpool, England.

They have recently signed to leading management agency, TMR, and plan a sonic incursion on the public with their forthcoming 10-song debut album, dated for release later in 2019.

Having toured around the UK with Marco Mendoza (The Dead Daisies), the band have already established a strong following. With their own brand of honest rock n roll, drawing upon the classic sound of the 70’s with a strong foothold in the modern day, Revival Black have firmly planted themselves within the new phenomenon, known as ‘The New Wave of Classic Rock‘.”