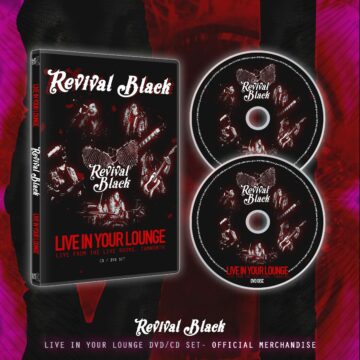 “Liverpool’s hard rock emerging talent, Revival Black, are delighted to announce a new live album and DVD – Live In Your Lounge – with a release date of Friday, December 11th, 2020.

The double-disc release is available for order now at https://www.revivalblack.com

The live show was recorded during lockdown at ATComms’ The Live Room in Tamworth in September 2020 and includes ALL songs from their debut album, Step In Line, plus two new songs, never recorded before – “Believe” and “Wrong Side.”

Guitarist, Alan Rimmer, said, “2020 has been a really bad time for live music. Fortunately, we did manage to cram some great shows in before lockdown but we have also lost out on some really cool festivals and it has been too long since we could play live with an audience. Touring is still not viable, so we are going to try and reach as many folks as possible with this live DVD/CD. We hope our fans can enjoy it, turn it up loud and rock out.

The band were then included on the UK Vinyl Charts #10 album ‘Earache presents… The New Wave Of Rock N Roll.’

They were due to rock out at Ramblin Man Fair and Steelhouse Festival this summer, both now rescheduled for 2021.