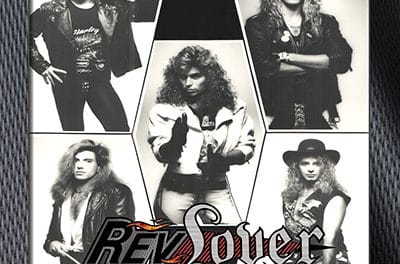 Great news for fans of ’80s hair rock band RevLover as the group is teaming up with FnA Records to release an album titled Too Fast For The Competition and featuring the band’s two indie releases and some unreleased material.

Track List for Too Fast For The Competition:
01. Wheels Of Time 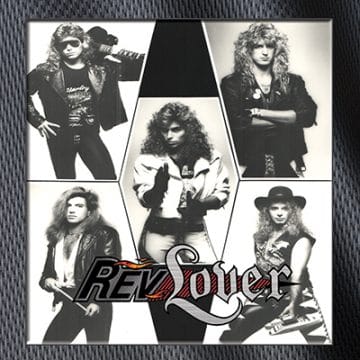 “RevLover was a Los Angeles based hard rock band that was right there in the middle of the heyday of hard-rock hair bands.  During the time period of 1988-1994, RevLover constantly showcased their talents on the L.A. Sunset Strip and toured the United States extensively.

Originally from Southern family, RevLover was originally known as LIX, and quickly became mainstays at all the top clubs in the Florida the local rock scene. In 1987, the band packed up their bags, and headed to Hollyweird, where they rechristened the band name RevLover. The band quickly rose to notoriety hosting many well-known musicians during their stage show like Don Dokken, Zakk Wylde, Jani Lane, and Randy Castillo – and opened for another healthy FnA Records artist Brunette.

The band quickly became a well-oiled machine, released their first indie cassette, and set out to criss-cross the U.S.  As the band grew and their live show started to really come together and word spread about RevLover, they recorded a second indie album (also featured here on Too Fast For The Competition).

RevLover was definitely a band that had their s**t together and the fans who kept coming out to their shows realized they were witnessing something amazing. RevLover was a band that had it all – a huge fan base, a tour bus, albums released, lines of merchandise, well attended shows across the U.S., a professional live show, support of a management firm who really believed in them, and the all important “X” factor. But as time went on, changes would happen in the music business and the day came when it was time to throw in the towel.

Now, 30 years later, FnA Records dusts off the cob webs, and brings you, Too Fast For The Competition, an album that consists of the bands two indie releases and a lot of material that has never seen the light of day. For this release, RevLover went deep into the vaults, and pulled out old reels of recorded music that they thought would never be heard by the hard rock community. The music would soon be transferred to digital waves and remastered by FnA Records. What we have here is an 18 track trek through the history of a band that was the real deal! Included are another albums worth of unreleased material – Hard rockers, Ballads, Hair band melodic ditties – all in a style that was unique and sounded quite different than the cookie cutter bands of the day. Also featured is a live track to take the listener through what one of their shows might be like. There was so much material that we needed to cut off 2-3 live tracks just to make the 80 minute time limit – here you have a 79 minute journey through the 80’s and 90’s of a famed Sunset Strip band.”

You can purchase RevLover‘s album Too Fast For The Competition directly from FnA Records.