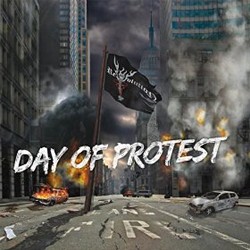 Most of the songs first surfaced on a CD of demos with the same title, ‘Day Of Protest’, which was released by the band in 2012. The purpose of the demos at that time was to land the band some gigs. In an interview with Sleaze Roxx approximately one year ago, Revolution guitarist Jamie Bekyarovich explained that, “The demo was recorded entirely at my house — mixed and mastered. It’s not the greatest quality at all but we just needed to get something out there — we needed to hand things to people to try and get shows. So at first what we tried doing was just put them altogether and give them away for a while. We started selling them after to make some money for future studio time.”

Since releasing the demos, the Canadian band has been hard at work to release the songs in a professional sounding manner. Given that all of the band members are currently 18 years of age or younger, there is a net progression in the songs on the recently released ‘Day Of Protest’ when compared to the demos that were released over two years ago.

As Bekyarovich noted, “The CD [of demos] was recorded two years ago, back when we first started so that everything is not exactly like it is now — styles have changed. We’ve all progressed as musicians rapidly and a lot better than what the CD has to offer so — I just wanted to make that clear (laughs).”

Two songs on the new album, “Freedom From Our Minds” and “Treason”, are being released for the first time.

‘Day Of Protest’ can be purchased at CDBaby, iTunes and the band’s own website at www.revolutionrockband.com.