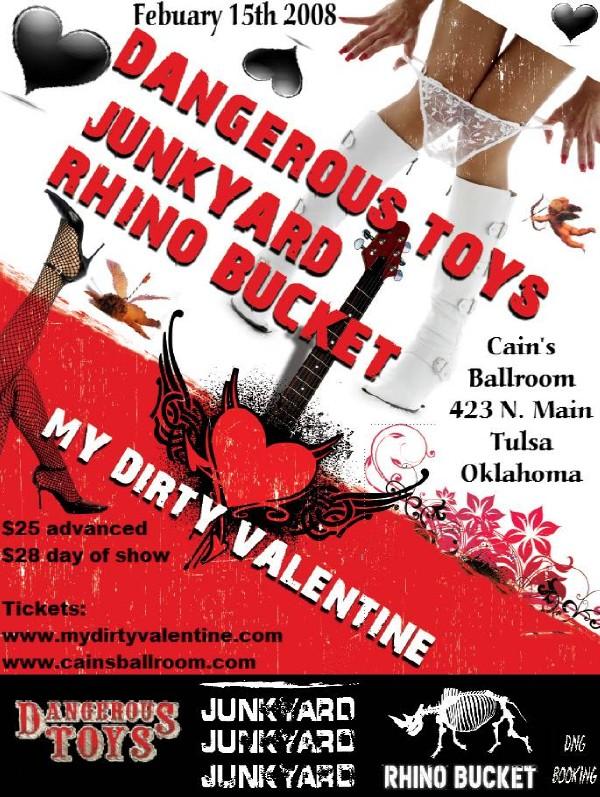 RHINO BUCKET, DANGEROUS TOYS AND JUNKYARD TO PLAY TOGETHER LIVE:

Febuary 15th 2008, Cain’s Ballroom in Tulsa, Oklahoma will experience a rock show like no other. For the first time on the same bill, Dangerous Toys, Junkyard, and Rhino Bucket have teamed up to do a one-off show of pure rock and roll. This show has been in the making for years and now the town of Tulsa will get to hear and see what real rock music is all about.

Dangerous Toys have 2 gold records under their belt and have been around the world a few times. They are the pride of Texas when it comes to rock and roll. With such radio and MTV hits as: Teas’n Pleas’n, Scared, Pissed, and Sportin’ a Woody, D’ Toys do not dissappoint when it comes to put-up or shut-up Texas style rock.

Junkyard are no strangers to blooze, hard rock ‘n’ roll from the streets. Signed to Geffen Records, they released 2 albums and a multi of MTV videos. With hits like: Blooze, Hollywood, All The Time In The World, and the fan favorite Hands Off, Tulsa will never be the same after this show. Original guitarist, Brian Baker, who is now in Bad Religion, will be playing this special one-off show with Junkyard.

Rhino Bucket are from the bad side of town. With their no holds barred, 3 chord rock riffs, they never cease to amaze a live audience. Signed to Warner Bros./Reprise Records “Back in the Day”,and now on Acetate Records, they come at you live like a loaded gun with songs: One Night Stand, Beat To Death Like A Dog, Welcome To Hell, and the love song She’s A Screamer. With drumming legend Simon Wright hitting the skins at this show, it’s gonna straight out ROCK!

note: These bands will NOT be at Rocklahoma ’08, so don’t miss this show!