Both European booking agency Teenage Head Music and Dolivo have posted photos and/or posters via Facebook that Rhino Bucket will be in Europe in 2022. The following message was posted on Teenage Head Music‘s Facebook page earlier today: 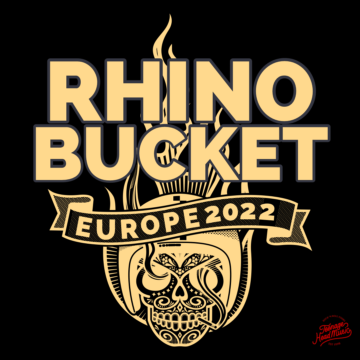 Back in early June 2016, Dolivo had announced that he was leaving Rhino Bucket given that he felt that the band’s music had been devalued to the point that it was not sustainable for the group anymore to continue. Forsythe also confirmed that Rhino Bucket would not be continuing without Dolivo. Fast forward almost five years and Dolivo has apparently changed his mind with the announcement earlier today.

In an interview with Sleaze Roxx back in mid-June 2016, Dolivo explained his rationale for leaving Rhino Bucket as he stated: “I just felt and still do that my time in Rhino Bucket was done. We had a good run and I had fought tooth and nail to keep what little was left of our income streams flowing. And as those streams slowly but surely disintegrated to literally next to nothing, it was a pretty easy decision for me. And let me be clear, I’m not talking about not being able to upgrade the Bugatti [laughs]. I’m talking about having to pick up shit jobs to be able to continue a band that could no longer sustain itself. That went on for the last few years.

The reality of it was that our earning power here in the States had bottomed out. And what was once our bread and butter, original song/music placement in movies and TV, had been decimated by greedy placement companies who insisted on co-publishing with no advance. We did well in Europe but we were never able to transition to larger festivals and/or tours. So, for me it was a gradual realization that if I wanted to continue Rhino Bucket, it would be solely as a hobby band for shits and giggles. And I refuse to let the band become that as long as it’s on my watch.”