A little more than a year ago, Rhino Bucket frontman Georg Dolivo decided to leave his band which effectively put an end to the group.

Dolivo had some choice words today about what he thinks of cover bands. 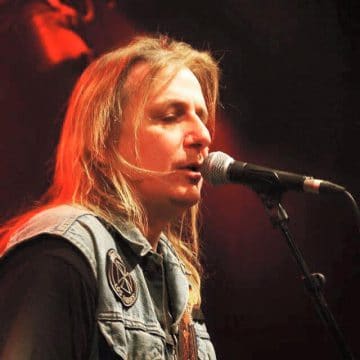 “Someone made a comment about why people slam cover bands as the original bands have much less of an audience.

This is my reply:

Yes, there is a fucking disconnect. Without new music what in the fuck would the cover bands play in 10 years. Another Bon Jovi cover? The difference is that some people want to design a different chair and some people just want a job making the same fucking chair over and over again. And people still ask why I quit…

Maybe a tad too aggressive, but still to the point.”

Shortly after announcing his departure from the band, Sleaze Roxx interviewed Dolivo and asked him what prompted his decision to leave and for how long that he had contemplated in doing so.

Dolivo replied: “I just felt and still do that my time in Rhino Bucket was done. We had a good run and I had fought tooth and nail to keep what little was left of our income streams flowing. And as those streams slowly but surely disintegrated to literally next to nothing, it was a pretty easy decision for me. And let me be clear, I’m not talking about not being able to upgrade the Bugatti [laughs]. I’m talking about having to pick up shit jobs to be able to continue a band that could no longer sustain itself. That went on for the last few years. The reality of it was that our earning power here in the States had bottomed out. And what was once our bread and butter, original song/music placement in movies and TV, had been decimated by greedy placement companies who insisted on co-publishing with no advance. We did well in Europe but we were never able to transition to larger festivals and/or tours. So, for me it was a gradual realization that if I wanted to continue Rhino Bucket, it would be solely as a hobby band for shits and giggles. And I refuse to let the band become that as long as it’s on my watch.”