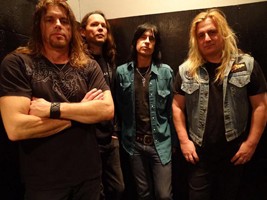 Rhino Bucket will be filming a live performance scene for the movie ‘To Hell With A Bullet’ at The Central (formerly 14 Below) in Santa Monica, California on Sunday August 19th and are calling on all Rhino Bucket fans to join the band for a chance to be in the movie.

Filming of the performance scenes start at 9pm, so get there around 8pm if you want to be included in the shoot. The filming will be followed by a rockin’ half hour set of your favorite Rhino Bucket songs.

Rhino Bucket currently consists of Georg Dolivo (vocals/guitar), Reeve Downes (bass), Brian Forsythe (guitar) and Dave DuCey (drums). The hard rock veterans released their latest album, ‘Who’s Got Mine?’, on February 8th, 2011 through Acetate Records and are currently working on a new studio album for release in 2013. For more information on the band visit www.rhinobucket.com.