MVD Visual and Acetate Records are pleased to announce the release of RHINO BUCKET The Hardest Town for worldwide distribution on CD.

Joined by former AC/DC drummer Simon Wright, Rhino Bucket once again delivers their distinct brand of three chord boogie rock n’ roll unlike any other on their latest release, The Hardest Town. 2006 marked return of Rhino Bucket after a 10 year lapse, with the release of “And Then It Got Ugly”. Picking up where the band left off, they introduced their newest member, guitarist Brian “Damage” Forsythe of KIX fame. A full scale US tour followed, including dates with Supersuckers, Velvet Revolver and a performance at the infamous Rocklahoma.

2009 will bring a US tour, including the “Rock Gone Wild” festival, and performances on the European festival circuit. Rhino Bucket’s “Welcome To Hell” is featured in the highly acclaimed Mickey Rourke film, The Wrestler.. They can also be heard on hit TV shows The Unit, Knight Rider and Sons Of Anarchy as well as Fuel TV, MTV and FOX Sports.

“Three chords and a cloud of dust” is how Rhino Bucket singer/guitarist Georg Dolivo describes his band’s brand of blue collar Rock. 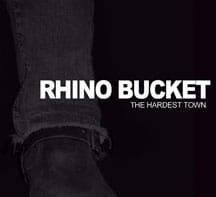 Signed to Warner Bros. in 1990, Rhino Bucket’s self-titled debut yielded two singles “One Night Stand” and “Blood on the Cross,” which heaved them to the Billboard Top 40 singles chart and made them regulars on MTV’s Headbanger’s Ball. Tours with The Black Crowes, Angel City and Junkyard (to name a few) ensued.

1992’s follow up “Get Used to It” was recorded by legendary producer Terry Manning (Led Zeppelin, ZZ Top) and spawned the single “Ride with Yourself,” which landed on the soundtrack to the blockbuster film Wayne’s World. In 1993 former AC/DC drummer Simon Wright joined the band for the recording of their third album, 1994’s “Pain”. This line-up toured relentlessly until 1995 when the band took what turned out to be an extend-ed hiatus.. Never ones to say die, a one-off sold-out reunion gig in 2000 inspired Georg and bassist Reeve Downes to reform the band with original drummer Liam Jason and ex-KIX guitarist Brian “Damage” Forsythe.

“Rock n’ Roll is like a disease,” laughs Dolivo. “Once you’ve got it, you’re stuck with it. I’ve tried blues and coun-try and all sorts of different styles, but I always come back to the rock. Maybe I’m just a one trick pony, but I really like the trick I know.”

The band hit the L.A. clubs and found their reputation had grown substantially. They stormed the scene, gained the attention of hip indie label Acetate Records, and started to buckle down to pen some new tunes.

“We were asked to write some music for the movie Rolling Kansas,” recalls Forsythe of their first soundtrack endeavour together – more followed, including the flicks Stateside, The Outdoorsmen and TV’s The Handler -“and the more music we made together, it just felt right. Georg has an idea and starts playing some lick, some-one will join in, an idea is born and we all jump in on it. It’s this chemistry thing.”

That chemistry is all over their 2006 release “And Then It Got Ugly”. From the explosive riffs to the soulful vocals and heartfelt lyrics, it is a much needed shot of no frills Rock n’ Roll that the music scene desperately craves.

Needless to say, more touring with friends like The Supersuckers and KIX followed well into 2007, a year which also saw the return of drummer Simon Wright at the Rocklahoma festival.

Currently, Rhino Bucket is concentrating on The Hardest Town and in the midst of setting up U.S.. and European tour dates.