Rich Kid Express featuring the one-man band Rob Richardson is aiming to release its debut full-length album in the fall of 2020. 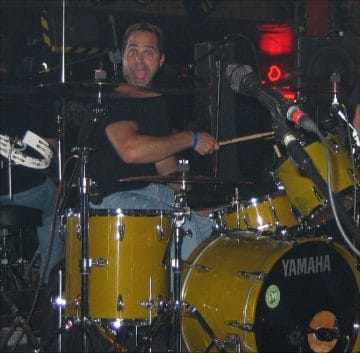 “Rich Kid Expre$$ is currently writing and recording their follow-up to the “Bubblegum Radio” EP, released back in February. Rob is currently hard at work finishing up vocals and touching up tracks trying to get things ready for a Fall 2020 release. The LP will feature around ten or eleven tracks and still focus on a mix of hard rock, glam rock and bubblegum tinged tunes. Some of the song titles announced are: “Pink Eye,” “Get Outta My Life,” “Kaleidoscope Caravan,” “Do It Your Way” and “Clock Strikes Four,” to just name a few.

“So far it’s been about a four month process”, says Rob Richardson. “I’ve got a few more songs to tweak up and a couple more vocal tracks to get finished and then I can finally get to the mixing process. It’s always a bit more time consuming when you’re working on your own. I tend to be very critical of some things, but I like a certain ‘looseness’ about other things. It just depends on the song really. I’m looking forward to getting this out there. The folks who liked Bubblegum Radio are going to get that same style and feel from this record. It’s a bit of an extension of that EP. My goal is to always keep the riffs and hooks in the songs.” More news to come as a completion date gets closer.”

Sleaze Roxx stated the following in its review of the Bubblegum Radio EP:

“Aside from the great melodies, what really struck me on Rich Kid Express‘ Bubblegum Radio EP was how good Richardson‘s vocals sound in the context of the songs themselves. There is no doubt that Richardson will not be the next Tim “Ripper” Owens with his vocal range and delivery but the former’s singing fits the songs on the Bubblegum Radio EP so well and is very similar to what Alice Cooper accomplishes on his albums. I think it’s fair to say that the Coop has never been considered a “great” singer but he has a knack for delivering songs that always compliments his vocals and it’s the same for Richardson.”