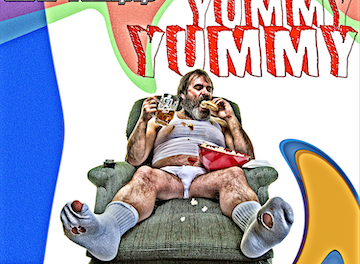 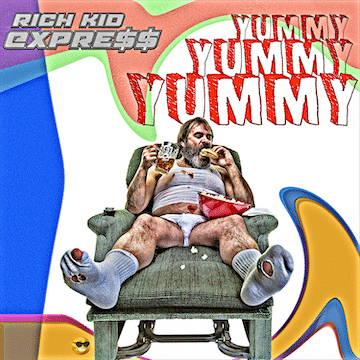 “Hot on the heels of of the well received debut EP, “Bubblegum Radio” released back in February, Rich Kid Expre$$ is set to release a brand new, rocked up cover version of the 1968 Bubblegum Pop classic, “Yummy, Yummy, Yummy.” (Originally recorded by The Ohio Express) .

Rob Richardson states the following on the release, “This was just an ‘off the cuff’ single for me to do. I’ve liked the old, original version since I was a kid. I had it on an old Ronco Record called FUN ROCK. It was a silly compilation of old bubblegum pop singles and oldies type songs. I liked it before I ever got into KISS and the all the other glam rock bands of the early seventies. My idea of course was to rock it up and give it a little more energy and pizazz. Once I put my twist on it and recorded it, I figured it would be a neat little holdover till the next EP/LP is done. My next project is currently being written and recorded and this fills a gap for a little bit. Just something silly to enjoy as the summertime approaches. With all this Coronavirus stuff going on, we need more lighthearted things in our lives.”

Sleaze Roxx stated the following in its review of the Bubblegum Radio EP: “Aside from the great melodies, what really struck me on Rich Kid Express‘ Bubblegum Radio EP was how good Richardson‘s vocals sound in the context of the songs themselves. There is no doubt that Richardson will not be the next Tim “Ripper” Owens with his vocal range and delivery but the former’s singing fits the songs on the Bubblegum Radio EP so well and is very similar to what Alice Cooper accomplishes on his albums. I think it’s fair to say that the Coop has never been considered a “great” singer but he has a knack for delivering songs that always compliments his vocals and it’s the same for Richardson. Within a few listens of the Bubblegum Radio EP, I knew exactly what I was going to say in my review but rather than just review it and move on to the next album, I decided to simply enjoy the EP for a couple more days before delivering this review. Rich Kid Express‘ Bubblegum Radio EP is the surprise album of the year for me. I never thought that I would enjoy it so much and it will definitely be on a regular rotation for the rest of 2020.”