Rich Kid Express spearheaded by Squib Kick Records‘ principal Rob Richardson have released a video for their upcoming debut EP Bubblegum Radio, which will be released on February 21, 2020. 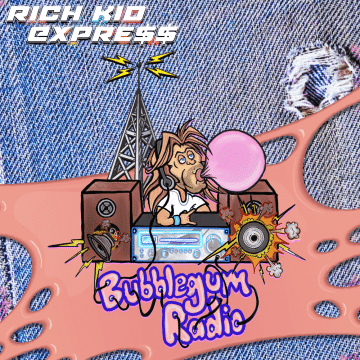 “The video and song pays tribute to all the early seventies bubblegum and glam rockers that helped shape and style the rock world in that era. From the late sixties through the mid seventies the glam rock scene exploded, and the UK bands that came out at that time really left an impact on the next generation of hard rockers that followed. T-Rex, Slade, Sweet, Gary Glitter and David Bowie all had their hand in shaping the future of the rock landscape. There were many unrecognized acts that followed suit and many years later the term “Junkshop Glam” was born (because you could find a lot of those records in thrift shops and bargain bins that nobody ever discovered) .

Rob Richardson states the following, about the video release…”’Bubblegum Radio’ is about my early youth and discovering the glam rock scene. My goal was to write a catchy song about that era of music and make it sound authentic to the time period. It’s paying a tribute to those bands who helped build that scene. The evolution of glam rock really turned into what I feel was the eighties LA scene. It seemed a natural progression to the hard rock and so called, hair metal that developed in the eighties. Without one, the other may not have come to exist.” Rob describes the song as a personal song as well. He adds, “’Bubblegum Radio’ may be the ‘lightest’ song on the EP, but it’s fun! My kids got to sing with me during the recording session, the video was shot around the house as a ‘look behind the scenes’ as to what I was doing during the four months it took to write the EP as well. It’s personal to me because it shows a little bit of my private life. I borrowed a little footage, just to fill some holes and made sure to include some rock magazines and records from back in the day. It’s just for fun, you can’t take it too seriously.”

The Bubblegum Radio EP is now available for pre-sale at Bandcamp. ”

Title track off the Bubblegum Radio EP by RICH KID EXPRE$$.Just a little tribute to the 70’s era of Glam Rock and Bubblegum scene.PRE-SALE @ Bandcamp – http:…