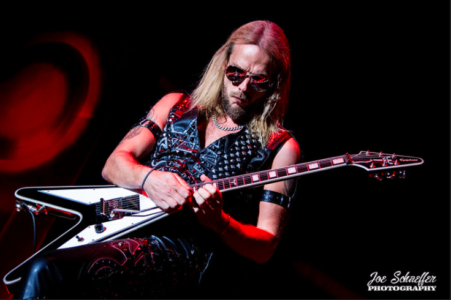 With respect to providing an update on the next Judas Priest album, Faulkner indicated (as provided by The Metal Voice with slight edits): “Since the Firepower tour, we went our separate ways like we do and we always got ideas coming up, me, Rob [Halford] and Glenn [Tipton] start putting ideas down. We got together in early 2020, me, Rob and Glenn — Andy Sneap was there as well — and we pulled all our ideas together and started the first writing sessions. We got together a batch of songs, by no means finished but they were developed enough we could call them songs, so we could give them working titles. They were demos. So we had a batch of demos and since then we have been trying to find an opportunity where we can all get together and develop them further and record them. Obviously with the restrictions at the time, lockdowns and the pandemic, we wanted to be together as a band to iron out those creases. It becomes evident when you play together what songs need. We have started recording some and getting it put together with those restrictions it has obviously been taking longer than we would like. We are working on it but obviously we are nowhere near a release date.”

In terms of the musical direction for the new music and whether it will be a Firepower part two album or from another Priest album era, Faulkner opined: “Whenever you start a record you never know how it’s going to turn out, so you might start with an idea of what it’s going to be and as it kind of rolls on it comes out something different, so you don’t quite know.  It is also kind of hard to sum up your own music I find. But I think this one stands on its own. It is not Firepower two. It is its own animal. If anything, I would say it is a bit more progressive in places and in places, it’s got a bit more of that Killing Machine swagger. I think it is a little more progressive than Firepower and like I said it has a little bit of that Killing Machine angry swagger attitude going on. But like I said it can turnout completely differently.”

You can listen to the interview with Richie Faulkner on The Metal Voice below: