Judas Priest recently embarked on their Firepower Tour in support of their new studio album of the same name with the record’s co-producer Andy Sneap taking guitarist Glenn Tipton‘s place for the tour dates. 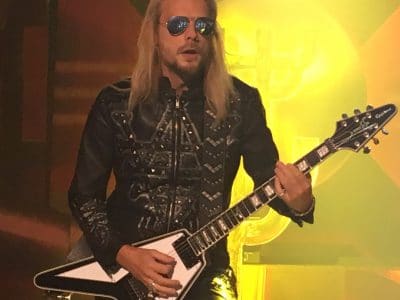 The band’s “other” guitarist Richie Faulkner was recently interviewed by Andrew Catania of All That Shreds and was asked how it was going with Sneap. Faulkner replied (with slight edits): “It’s going great. Andy’s holding it down. It’s a tough position to fill,  especially, um, when Glenn still around, you know, so you’re doing it in the right way. He’s doing it respectfully. Um, he knows, you know, he doesn’t want to be the new guitar player and priest, he knows Glenn is still in the band, and that is respectful of that. So he’s playing, he’s playing the part where he did a great job in, uh, it’s good to write about that.”

In terms of whether Sneap and Faulkner are meshing well live, the latter stated (with slight edits): “Absolutely. Yeah. It’s nice and tight on stage in, and I’m taking the majority of the load a solo wise, you know, some of Glenn‘s solos I’m playing as well as my own. Andy plays a few solos as well.  We’re synching up and laying it down.  It’s heavy, tight and sounds like Judas Priest.”

You can read the rest of the interview with Faulkner at All That Shreds.

Sleaze Roxx recently attended Judas Priest‘s tour stop at the Tribute Communities Centre in Oshawa, Ontario, Canada and stated as follows in its review: “My seat on the arena floor ended up being right in line where guitarist Richie Faulkner was standing. Faulkner is really a brilliant guitarist. He made playing the guitar look so easy and effortless. He was always looking into the crowd, making eye contact with audience members and singing the words of the song while playing guitar. He also threw what must have amounted to 100 guitar picks throughout the show. I was glad to pick one up from the floor early on because towards the end of the show, it seemed like it was a mad frenzy among concert goers to get one of Faulkner‘s guitar picks. Grown men were on their knees with their cell phones hunting feverishly for that elusive guitar pick to likely add to their collection. It was funny to see how a concert can seemingly make a little kid out of a grown man….

The “new” guy Andy Sneap seemed really into the songs but was positioned on the other side of the stage so I really didn’t notice him that much. No disrespect to guitarist Glenn Tipton but Sneap seemed to move around on stage a lot more than Tipton usually does. Yes, I am aware that there’s probably a 30 year difference between the two of them.”