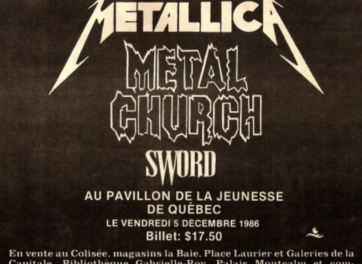 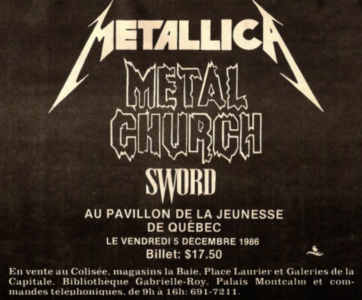 Sword got the amazing opportunity to open for Metallica on the latter’s Master of Puppets Tour throughout Canada back in 1986. Hughes explained how Sword landed that opening slot (as provided by The Metal Voice):

“Kerrang magazine editor was doing an interview with Lars Ulrich (around 1986) and he (editor) had his Walkman at the time (with the cassette). Just before he (editor) left the interview, Lars asked him what are you listening to, I’m curious to know what’s in your Walkman? Oh it’s a band from Montreal (Sword) and he gave him (Lars) the tape.”

Off camera, Rick Hughes explained the story a bit more. “Lars took the tape and not too long after we got a call from Metallica‘s management to open for the band in Canada on the Master of Puppets tour in 1986. Lars told me this Kerrang story backstage, in his dressing room on the first night of the Sword / Metallica tour.”

You can listen to the interview with the three Sword band members on The Metal Voice below: