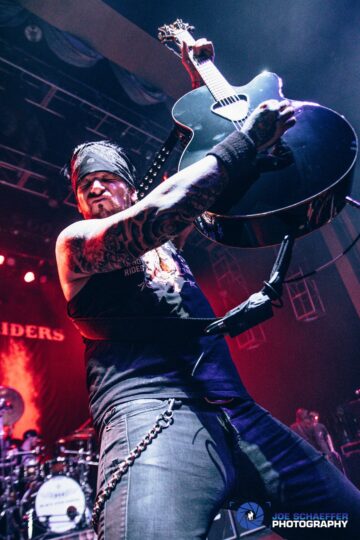 In terms of whether there are any Thin Lizzy shows that are planned for the future, Warwick indicated (as provided by Rock Pages with slight edits): “It’s Scott Gorham’s thing and I know I’ve been talking to Scott. There will be some Thin Lizzy shows in the future. I think as long Scott wants and is able to play there will be Thin Lizzy shows. I don’t think it’s going to be a tour, just a few festivals and one-off shows, like we’ve been doing in the last couple of years.”

With respect to whether the band is starting to move away a bit from the Thin Lizzy pattern of writing and making a song with the last two Black Star Riders albums, Warwick stated: “Ehhm, maybe, but we are not consciously thinking about it. As long as Scott Gorham is in the Black Star Riders, we will always have this Thin Lizzy connection. Because of how he plays guitar and who he is. And that’s wonderful. We don’t want to lose that. We’ve had some line-up changes and obviously when a new personality, when new blood comes in, they put their DNA in the songs and the playing. [That happened with] Christian Martucci coming in for the last record. He is a great guitar player and such a big personality. I mean he really made his mark on the playing and on the record. But, like you said, Yiannis, we’ve been together for nine years and we are about to make our fifth album. We are our own band, we have developed and we have absolutely moved on since we started. We’ve been around a long time now, so we are very comfortable in our own skin now.”

In regard to replacing Lynott as the singer in Thin Lizzy and whether he tries to be like him, Warwick noted: “No, you can never be Phil. Phil is iconic and unique. Straight away I didn’t even think “Ah, I am the new singer of Thin Lizzy, I am going to replace Phil.” No! That’s so wrong to even think about that. I never wanted to stand in those shoes. All I ever wanted and hoped for is to stand beside them. That’s what I do and keep his songs and passion and his eminence going. I thought when Scott asked what I would want to see. I want to hear the songs as close to the way we know and love them. Because, there was no point in “I am going to do it in a different style”. Fuck that! You wanna hear the songs of Thin Lizzy, you wanna go there and hear the songs the way we know and love them from the record…. When I close my eyes Yiannis, I don’t see me singing with Thin Lizzy, I see Phil and Phil is the lead singer of Thin Lizzy. Always have been and always will be. I am not. I just get to look after his songs. That’s all I am doing, I am looking after his songs.”

You can listen to the interview with Ricky Warwick by Rock Pages below:

“Thin Lizzy are a hard rock band formed in Dublin, Ireland, in 1969. Two of the founding members, drummer Brian Downey and bass guitarist and lead vocalist Phil Lynott, met while still in school. Lynott led the group throughout their recording career of twelve studio albums, writing most of the material. The singles “Whiskey In The Jar” (a traditional Irish ballad), “The Boys Are Back In Town” and “Waiting For An Alibi” were international hits. After Lynott‘s death in 1986, various incarnations of the band emerged over the years based initially around guitarists Scott Gorham and John Sykes, though Sykes left the band in 2009. Gorham later continued with a new line-up including Downey.

Lynott, Thin Lizzy‘s de facto leader, was composer or co-composer of almost all of the band’s songs, and the first black Irishman to achieve commercial success in the field of rock music. Thin Lizzy featured several guitarists throughout their history, with Downey and Lynott as the rhythm section, on the drums and bass guitar. As well as being multi-racial, the band drew their early members not only from both sides of the Irish border but also from both the Catholic and Protestant communities during The Troubles. Their music reflects a wide range of influences, including blues, soul music, psychedelic rock, and traditional Irish folk music, but is generally classified as hard rock or sometimes heavy metal. Rolling Stone magazine describes the band as distinctly hard rock, “far apart from the braying mid-70s metal pack”.

AllMusic critic John Dougan has written that “As the band’s creative force, Lynott was a more insightful and intelligent writer than many of his ilk, preferring slice-of-life working-class dramas of love and hate influenced by Bob Dylan, Bruce Springsteen, and virtually all of the Irish literary tradition.”

In 2012, Gorham and Downey decided against recording new material as Thin Lizzy so a new band, Black Star Riders, was formed to tour and produce new releases such as their debut album All Hell Breaks Loose. Thin Lizzy plan to reunite for occasional concerts.”

Thin Lizzy performing “The Boys Are Back In Town” at Monsters of Rock Festival in Bietigheim-Bissingen, Germany on June 18, 2016: