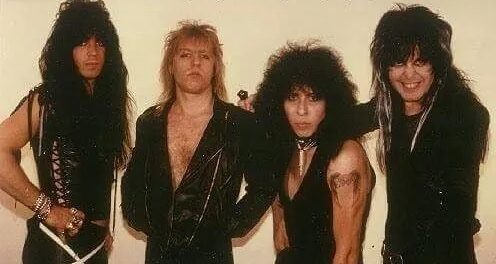 Fox was part of W.A.S.P.‘s first line-up which also included Blackie Lawless on lead vocals and guitar, Randy Piper on guitar and Tony Richards on drums. Fox ended up spending four months in the band but not without leaving his mark given that he claims to have come up with the group name W.A.S.P. and he played on the band’s original demo, which later became known as the Face The Attack demo. For unknown reasons over the years, Fox has had to continuously defend and prove that he was a part of W.A.S.P.‘s legacy and early days even though there exists early era photos of the line-up in question. 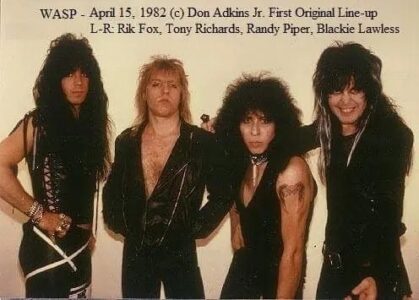 DiCecco asked Fox about the dynamics within W.A.S.P. when he was in the band to which he replied: “Well, Blackie was from New York; I’m from New York. New Yorkers have a very different mindset compared to the rest of the country. In New York, you’re raised on street culture, sarcasm, wiseguy cracks; you insult your friends as a form of affection. When you’re accepted into whatever circle your friends with, you’re able to make cutting comments back and forth at each other without it turning into a fight because that’s your form of acceptance in the gang, so to speak. That concept is not very well understood outside of New York, and you take that to California, which was a completely different mindset. At first, Randy didn’t understand my sense of humor, because I’m real quick with the wits, and snappy comebacks. He’s from Texas, and nothing wrong with Texas, but I guess he didn’t understand that kind of humor, and he offered to quit the band. Then Blackie said, “You better get down there because if he quits the band, you’re fired.” And Blackie has a history of being a bully to his own band members — Randy would admit that because he and Randy used to knock heads all the time — even before I was in the band.

So, I went down to the studio. Randy loves champagne, so I got a couple of bottles of cheap champagne, and just he and I sat in the studio, and we just talked for a couple of hours. By the time it was over, we got along like peas and carrots. Randy was laughing at my jokes, he understood where I was coming from, he thought I was a funny guy all of the sudden. We got along great. So, my recollection is that I got along really well with Randy; I got along really well with Tony. Well, all that’s left is Blackie.

Blackie lived in this little rental cottage in Hollywood, and he had a very small book stand with some books in it. And he had books in there about Hitler, Joseph Goebbels, and stuff like that. And I said, “What’s with the Hitler books?” He goes, “Well, there was a thing called The Big Lie,” meaning the bigger the lie, the more outrageous it is, the more people are going to believe it. This is a reoccurring theme, and pattern that Blackie seems to employ. After I was out of the band, there comes the big lie: “Rik was never in the band.” The more outrageous he makes it sound, the less I seemed plausible as far as being in their universe. He doesn’t like having to explain me, because that would invalidate his claim that I was never in the band.

Friends of mine would see W.A.S.P. out on the road at various shows, and say they’d go up to Blackie… “Hey, how you doin’? I’m a big fan,” and Blackie’s all amicable and nice. [My friend] goes, “Yeah, I’m a friend of a guy who played with you.” Blackie goes, “Who’s that?” They would say, “Rik Fox.” And they said every, single time, [Blackie’s] face would turn red, he’d get this pissed-off look, turn around, and walk away. So, [Blackie] knows. I am the thorn in his side, I am the skeleton in his closet. And don’t give me any of that, “I’m a Christian now b.s.” That’s smoke and mirrors. If he was a true Christian, then he would say, “You know what? You’re right, I should have admitted this. Yeah, Rik was in the band…” At this point, even if he admitted it, finally, I don’t even know if the fans would believe him. He’s the master of deception.”

I say that because if you look back retrospectively, as soon as the band got signed, the band members got turned from being band members into hired session guys. They were employees and could be hired or fired at Blackie’s whim. That’s one of the things that really infuriated Chris, looking at the lawyers — at the paperwork — he was reduced to be a hired session guy, not a band member. That’s pretty fucked.”

On whether he’s not on speaking terms anymore with Lawless, Fox indicated (with slight edits): “The last time Blackie and I talked, was when I was in Steeler, and we were playing The Roxy with Vandenberg; they had that Top-10 hit “Burning Heart,” at the time. We did a double show; we did an early show and a later show. Between shows, while Vandenberg was on, up in the dressing rooms, Nikki Sixx walks in. I had been friends with Nikki since I first arrived in L.A. — and he had Blackie with him. Nikki pulls me into the bathroom, he locks the door, and he says, “Hey, I wanted to congratulate you. I’ve seen you both try to work your way up, and you’re finally with one of the biggest bands in L.A.” And [Nikki] opens up the little makeup compact and takes out the little white powder and a straw. Here’s Nikki and I bonding in the bathroom, and Blackie’s pounding on the door going, “Hey, what’s going on in there? What’s going on in there?” Nikki giggles and says, “Watch this…Shut up, old man!” Totally mocking Blackie. I mean, they’re friends to this day, but that was what he did at this particular point. We come out of the bathroom, and Blackie, with his big, pouty lips, is going, “What’s going on? What’s going on?” And Nikki’s laughing, and I’m laughing.

I guess Blackie was hedging his bets at that point because I was in a position now — I don’t wanna say a position of power — but Steeler was one of the top drawing metal bands in L.A. at the time, in ‘83. [Mötley] Crüe had already been signed, Ratt was getting big, and there weren’t that many other bands at that level. And we had Yngwie [Malmsteen] in the band, so we were speaking from a position of power. So, Blackie goes, “Hey, if you ever need any help in the business, don’t be afraid to give me a call.” I said, “First of all, I don’t have your number. Second of all, if you really want to be a friend to me, why don’t you just admit to everybody that I was in the band? What’s all this cloak and dagger shit?” And he goes, “Well, the game isn’t played that way.” I said, “What do you mean game? What game? Why can’t you just be honest?” From that point on, he turned on me, and we haven’t spoken since.”

You can read the rest of the interview with Rik Fox at Vinyl Writer Music‘s website.