Former Headbanger’s Ball host Riki Rachtman was recently interviewed by long-time Sleaze Roxx contributor Ruben Mosqueda for KNAC and he spoke about some of the “challenging” interviews that he conducted while hosting the Headbanger’s Ball on MTV from 1990 to 1995.

Rachtman recalled (with slight edits): “Well, the most asked thing is something like, “Oh my God, what was up with you and Dave Mustaine”? That gets talked about a lot because Dave Mustaine always gave me a hard time as did Glenn Danzig. I 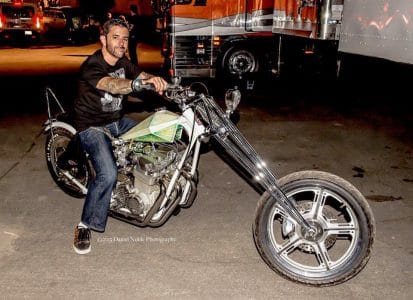 also get asked about “Oh dude, did Glenn Danzig really want to throw you in the fire in Germany”?! Here’s the truth people: Glenn Danzig played my birthday party in the V.I.P. room at Bordello. Megadeth played The Cathouse several times and I used to go skydiving with Dave Mustaine. The fact of the matter is nobody ever says that was a cool interview with Lars [Ulrich]. I had two options, I could let Dave have a little fun at my expense or I could get pissed and say screw you Dave! Nobody wants to see that, people want to see Dave give Riki a hard time! It was about two years ago I was having a conversation with Dave and he said “Riki we were like the Abott and Costello of MTV”. He was right, everyone remembers Dave giving me a hard time. I wanted people to have a good time and have things that they could remember. If I needed to be the fall guy and have Dave make fun of me, so be it. I think the world of Dave and I know he thinks highly of me as well. It ended up being brilliant and we had Megadeth on so many times because they helped raise the bar.”

When Mosqueda pointed out that Mustaine and Danzig didn’t come off as difficult because it looked like they were giving Rachtman a nice ribbing, the former indicated: “It’s because you get it! [laughs] I really think there were people that thought that Dave Mustaine and Glenn Danzig were going to kill Riki Rachtman! [laughs]”

You can read the rest of the interview with Riki Rachtman at KNAC‘s website.