It appears that Poison and Devil City Angels‘ drummer Rikki Rockett is not out of the woods completely when it comes to battling his oral cancer.

The San Diego Tribune posted an article two days ago about Rockett‘s latest battle against tongue cancer and a video that he posted to make people aware what cancer immunotherapy is all about. 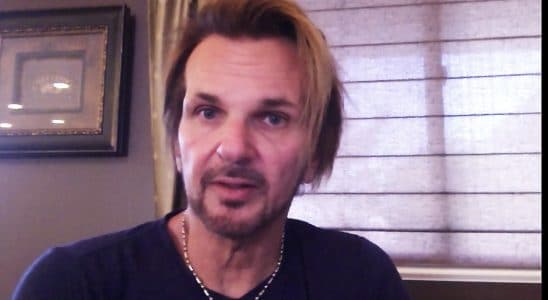 Back in December 2015, Poison‘s frontman Bret Michaels had informally announced a Poison tour for the summer of 2016 but any inkling of those plans likely got derailed with Rockett‘s continued battle against oral cancer.

The following are excerpts from the San Diego Tribune article / interview:

To give other cancer patients hope and knowledge, Rockett recorded a video discussing his experience — the fear, the uncertainty, the quest for options, and finally a treatment. Most people don’t know what cancer immunotherapy is, and Rockett wants to get the word out.

Under the care of Dr. Ezra Cohen, Rockett underwent treatment including a “checkpoint inhibitor,” a drug that removes a defense cancers use against the immune system.

Rockett had been originally treated in Los Angeles, where he lives. Like many cancer patients he received radiation and chemotherapy. It worked temporarily, but soon the cancer appeared to be returning.

A scan revealed that his original tumor was still there, along with signs of more trouble.

Rockett was faced with a number of undesirable options — including a total removal of his tongue. Rockett‘s chemotherapy physician suggested he apply for a clinical trial of cancer immunotherapy at UCSD. He was judged a suitable candidate for the treatment.

Rockett said he learned of his acceptance on March 1, while at Disneyland with his daughter, on her 3rd birthday.

“I was doing everything I could to think positive and that I was going to get on the trial,” Rockett said. “My little girl’s getting her makeup done, and I get a call.

“It was almost like God intervened …. for your daughter’s life, I’m going to make this happen,” Rockett said.

Rockett‘s tumor is nearly gone. In two weeks, he’s due for another exam, and hopes it will be eradicated.

And as for the gigs?

“My understanding is there is a possibility for a spring tour on the table,” he said. “I don’t know the details, but that would be great to look forward to.”