Poison and Devil City Angels drummer Rikki Rockett reflected publicly yesterday via his Facebook account on the one year anniversary of the start of a clinical trial for immunotherapy (via a new drug) that he underwent to successfully defeat his oral cancer. 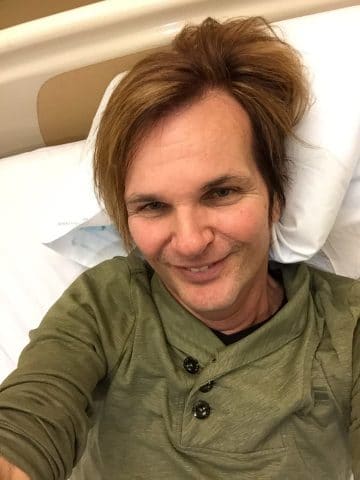 “One year ago today I started a clinical trial for immunotherapy one week after my daughter, Lucy‘s 3rd birthday. I was faced with oral cancer that was not responding to radiation or chemo.

My decisions:
1.) Have surgery that would render me unable to ever speak again. 2.) Try a different chemo that would only buy me time
3.) Try a clinical trial of a new drug combination of immunotherapy. )However, if it didn’t work, it might be too late to change course and save me.)

I rolled the dice and began a trial at UCSD Moore’s Cancer Center led by Dr. Ezra Cohen and Dr. Sandip Patel. Leaders in the immunotherapy field. Dr. Cohen was the lead Dr. for Head and Neck Cancer.

I was more scared than I have ever been, but nine weeks later when I got my first PET/CT/MRI the cancer had shrunk over 90%!!! A mere nine weeks later I was 100% cancer free on July 13th, one day before my son, Jude’s 7th birthday.

One year later I am still cancer free and preparing for the Poison 2017 30th anniversary tour. I have Dr. Cohen, Dr. Patel, Tony Le, my amazing girlfriend Tc Smith, my friend Cortni Miller and the all the fantastic staff at UCSD Moore’s Cancer center and last but certainly not least, God to thank. My little girl Lucy would touch my neck and say, “All gone Daddy” almost every day. It was gone…