Riot Act have released a video for their re-recording of the Riot classic “Overdrive.” The video premiered earlier today on The Metal Voice. It’s the first release from the band since former Riot guitarist Lou Kouvaris passed away from Covid-19 complications back on March 28, 2020. The remaining Riot Act band members are original Riot guitarist Rick Ventura, lead 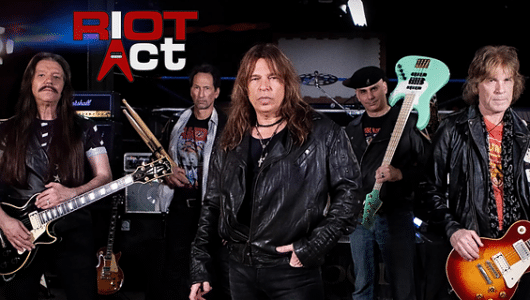 In an interview with The Metal Voice back in late January 2020, Ventura and Kouvaris spoke about how they thought that fans would receive another Riot band.

Ventura indicated (as transcribed by The Metal Voice with slight edits): “I think Riot fans will always know Riot as Guy Speranza and Mark Reale as they were an important part of Riot history as they were the writing team of Riot. Lou and I contributed songs to Riot and we were there from the beginning. I think fans will appreciate us playing those classic tunes because we were the guys that played on those early records. You’re never going to bring back Guy or Mark or Rhett so it’s like not really that same band because key members are gone but we were there from the beginning so the spirit of band lives on in us and that’s what people pick up on.”

Kouvaris stated: “I think one thing that that will will be evident is the fact that the sound that Rick and I have is basically the true sound of what Riot was back in the day. There’s no question. You’re gonna hear that in the music video we just did with “Swords And Tequila.” Riot V are our friends and what they do is fantastic and we support them. I mean they gave us a thumbs up on doing this. They had no qualms about what we’re doing so I’m pretty happy about that.”