Aussie sleaze metal rockers Riot After Midnight have released their debut video for the song “Breakdown.”

Speaking exclusively to Sleaze Roxx, Riot After Midnight frontman Andy Lixx provided some information on the band as he stated: “The band was formed by myself [Andy Lixx] and bassist Joel Foulds six years ago under the name Katt Scratch Fever. 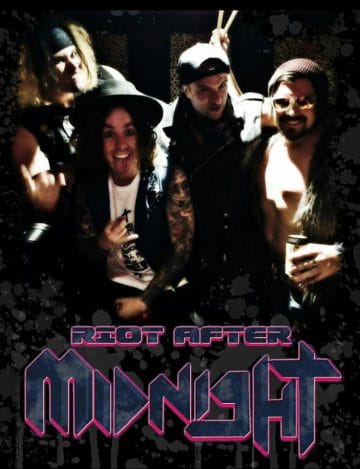 It was essentially a garage band built by two high school buddies. After a few line-up changes and bumps in the road to get the band started, we had stopped until meeting drummer Ryan “RJ” White and guitarist Johnny Pav. After a few get togethers in 2015, we started out as drinking buddies with a love of different genres of metal/hard rock. I am heavily influenced by ’80s glam/shock rock and the new age sleaze of the 2000s. Joel is influenced by ’80s glam and pop punk. RJ is into heavy metal, nu metal, pop punk and certain country aspects. Pav likes ’80s heavy metal / thrash.

Around this time we got together jamming and eventually gigging after our styles started meshing well and we found something that worked for us forming Riot After Midnight. Since then, we have played in various venues around Melbourne [Australia] and Regional Melbourne opening for metal monsters Elm Street at Cherry Bar and various gigs with our hard rock brother band Lace & Whisky. In addition, we have had a feature spot at the Melbourne Pub Mini Festival.

Our live shows are best described as loud, energy filled and most importantly, fun. We love to enjoy our time on stage and involve the crowd as well as tear the house down with our sound and stand out stage attire. The best feeling is when a 50 year old guy lingering in the back of the crowd with a beer approaches you after the show and says ‘Thanks for taking me back to my younger years.’

At this moment, we have a few more videos in the works soon to be released and a mini-tour aimed for early January / February 2019 of Melbourne, Geelong and Warrnambool with our aim of ending in Adelaide or Tasmania. We also have a gig in the works coming up around September / October [2018] so keep an eye on our Facebook page for details. Our upcoming EP is scheduled to have six tracks plus a couple of bonus ones and is due out towards the end of the year.”