Australian rockers Riot After Midnight consisting of lead vocalist Fouldzy, lead guitarist Pav, bassist McKenz and drummer RJ have released a video for their cover of AC/DC‘s classic track “What Do You Do For Money Honey.” The song emanates from AC/DC‘s biggest selling album and one of the top selling records of all-time, Back In Black (1980). 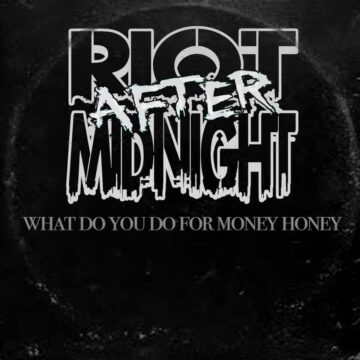 Sleaze Roxx stated the following in one of its three reviews for Back In Black:

“Now chances are I don’t have to tell anyone hanging out at Sleaze Roxx about this album. Even if you don’t dig Back In Black, you know it and you know it pretty well. If anything, you know “You Shook Me All Night Long” and “Back In Black” as they are spiritually pretty much two of the biggest tunes in the hard rock hymnal. The title track is nearly as legendary after all, those bells toll the start of the final farewell to the legendary Bon Scott who they lost merely months before the release of Back In Black. But for some of us rock and rollers, this is part of a youthful soundtrack so deep that it may as well be branded or tattooed on our souls.

As kids we debated the opening lyrics of “Rock and Roll Ain’t Noise Pollution” until we deciphered its intended uplifting message and anchored it as a battle cry for everything from standing up for our music to stepping up to the plate in conquering any and all of life’s obstacles. Tunes like “Shoot To Thrill” and “Have A Drink On Me” only made us dance harder in our efforts to sneak in those little vices we deemed necessary to be part of the gang. Aaah, those early bad attempts to impress the pals while believing in this silly notion that a beer and some bad language would put us right in line to earn the right to sing along to songs like “Let Me Put My Love Into You” or “Givin the Dog a Bone.” Looking back, I think the only thing we earned was getting laughed at by the opposite sex but even so, all ten songs were kick ass and worth listening to whether anyone was watching or not.”

Riot After Midnight‘s “What Do You Do For Money Honey” video: