Riot After Midnight release video for new single “Yours All Night”

Australian rockers Riot After Midnight consisting of lead vocalist Fouldzy, lead guitarist Pav, bassist McKenz and drummer RJ have released a video for their new single “Yours All Night” from their upcoming sophomore album. 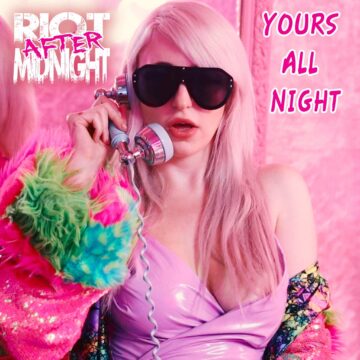 Speaking exclusively to Sleaze Roxx, Fouldzy was asked about the inspiration for the band’s video to which he indicated: “As this was the first single from the new record, we wanted to do something out there and over the top. The single is a bit more polished and commercial sounding than anything we have done in the past and wanted the video to be as bright and as trippy as possible. Over the years, our videos have become more over the top and the fashion side of things has also been a great influence on our tunes. We made sure for this clip that the fashion and backdrops were the main focal point.”

In terms of when people can expect Riot after Midnight‘s new album to be released, Fouldzy stated: “The new album is set to be released in March 2022 with a handful of singles to be released before then. Each single will differ in many ways to show the different styles of songs that run through the album.”

With respect to how Riot After Midnight‘s new album differs from the first one, Fouldzy opined: “Over the course of our five years together, our style of music and look has made it very difficult for listeners to pin point an exact genre. So on this record, we thought we would make it even harder! Mixing influences from rock n’ roll, glam metal, pop music and many other genres, this album will be a unique piece of work that differs from the first album with many tempo/key changes while still keeping an overall heavy sound!”

Riot After Midnight‘s “Yours All Night” video: