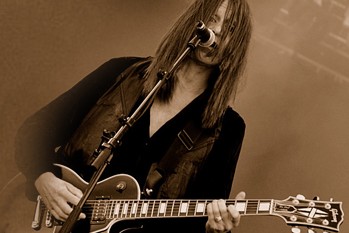 Riot founder and guitarist Mark Reale has passed away after a lifelong battle with Crohn’s disease — he was 56 years old.

In a short statement the remaining members of Riot said, “We are deeply saddened to confirm that Mark has lost his battle with a lifelong illness.Your thoughts and prayers are appreciated by Mark’s family, friends, and bandmates at this difficult time.”

Damon Di Bari, the ‘6th’ member of Riot, posted the following heartfelt tribute on Mark Reale’s official website, www.markrelease.com, “Our brother Mark Reale went home to be with our Lord this day January 25th 2012 after a long battle and complications from Crohns disease. He is survived by his father Anthony Reale and was precede in death by his mother Frances Reale.

Mark was born June 7th 1955 in Brooklyn New York at a time when rock and roll was flourishing with many new sounds. Early in his life, his first interest had been the movies, ever so curiously, he had shown an interest in films. But then, songs he heard on the radio began to change that. He quickly began to love music from the Beatles and Cream. Mark lists George Harrison and Eric Clapton as great influences. When he was 7 years old his grandfather bought him his first basic guitar to practice on and later his father bought him a new guitar and amp — the passion had begun.

In the early to mid 70’s his influences included the likes of Edgar Winter, Ronnie Montrose and Rick Derringer. He also loved a range of bands and artists from Al Di Meola to Deep Purple. In 1975 Mark formed the heavy metal band Riot, then at a block party Mark’s father found vocalist Guy Speranza. Mark’s guitar style and his passion for writing songs that told stories that were so deep and moving had made a real connection with those who would become life long fans. The fans felt so connected to Mark because the lyrics in Riot’s songs were extremely close to the stories of their own lives. His song writing style could weave tales of anything from old lore to battle fields and warriors, personal loss and triumph. And heavy metal anthems that will be with us for decades to come.

The brethren of brothers that mark spent his life long career in music with and whom he leaves behind or joins in heaven are, Guy Speranza, L.A Kouvaris, Kip Leming, Peter Bitelli, Rhett Forrester, Rick Ventura, Jimmy Iommi, Sandy Slavin, Tony Moore, Don Van Stavern, Mike Flyntz, Pete Perez, Bobby Jarzombek, Mike Di Meo, John Macaluso, Bobby Rondinelli, Mike Tirelli, Frank Gilchriest and Damon Di Bari who was always like the “6th” member of the band being Riot’s lighting director / production manager / tour manager and Mark’s personal assistant. Mark’s final days were spent with Damon at his hospital bedside, sharing the fans thoughts, well wishes and prayers. Even though Mark began his career in New York, San Antonio was a special place he loved and not only lived here for awhile but had planned on moving back here to make San Antonio his permanent home.

With heart felt thanks to the fans around the world, the United States, Japan, Europe and all points in between, the Riot Army ment everything in the world to Mark, it’s what kept him going. The loyalty and love of the band’s fans fueled his passion and desire to continue making music for as long as possible. Please keep the mighty tor in your hearts and the memory of Mark alive within you. Shine on, Mark shine on!”

After initial success in the late 70’s and early 80’s with albums such as ‘Rock City’, ‘Narita’, ‘Fire Down Under’ and ‘Restless Breed’, iconoclastic metal band Riot rose from the ashes after a few years of silence to release ‘Thundersteel’ in 1988, an album that would become as celebrated as the new line-up that spawned it: Mark Reale (guitars), Tony Moore (vocals), Don Van Stavern (bass), Bobby Jarzombek (drums), and Mike Flyntz (guitars, who joined the group during Riots’s first triumphant ‘Thundersteel’ tour of Japan).

Their follow-up release, 1990’s ‘The Priviledge Of Power’, flexed Riot’s creativity and metal muscles even further, cementing renewed fan interest around the world, particularly in Europe and Japan. In the ensuing years, the ‘Thundersteel’ line-up became near-legendary in the metal canon. They were hailed as “the bridge between Priest and speed metal” and have been heralded as an influence by many, including Hammerfall who covered “Flight Of The Warrior” on their album ‘Masterpieces’.

After releasing several albums, the ‘Thundersteel’ line-up of Reale, Moore, Van Stavern, Jarzombek, and Flyntz joined forces once again, for the first in some 20 years, with the 2011 album ‘Immortal Soul’.