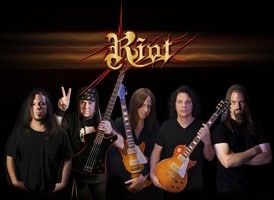 Few bands deserve to be talked about in such revered terms as Riot.

Bursting through from New York City at the end of the ’70s with three ground-breaking albums on the trot (‘Rock City’, ‘Narita’ and ‘Fire Down Under’), Riot quickly became one of the biggest cult metal bands in the world. Stunning performances in the UK at the first ever Castle Donington Festival in 1980 and Port Vale the following year and support slots with Sammy Hagar in Europe and AC/DC in the United States cemented their reputation as the hottest ticket to see.

With line-up changes knocking their momentum and the ’80s developing into a Thrash-fest a new-look Riot bounced back in 1988 with the widely-acclaimed ‘Thundersteel’. Although the faces might have looked unfamiliar, with only guitarist Mark Reale now left from the band’s formative years, the aggression and musicianship remained unrivalled and unchallengeable. With Tony Moore’s distinctive vocals, the muscle and might of bassist Don Van Stavern and drummer Bobby Jarzombek powering the songs along, and Reale’s precision playing Riot were reborn, and followed ‘Thundersteel’ two years later with the jaw-dropping ‘The Privilege Of Power’, an inspiring and at times truly epic album. However, by this time the music world was turning into a very different place, and Riot found themselves struggling against a tide of apathy. Reale continued to guide the ship through the next two decades, delivering albums of consistent, quality metal, culminating in 2006’s ‘Army Of One’ — a true statement of intent, as if one were needed.

But the army of one is an army of five once more as Riot’s classic ‘Thundersteel’ and ‘Privilege…’ line-up has re-united, adding guitarist Mike Flyntz who played in the live band at that time. Signing with SPV/Steamhammer for all territories except Japan, Riot will release their new album ‘Immortal Soul’ on October 28th in Germany, October 31st in Europe and early November in the US and Canada.

Riot have also been confirmed as special guests on the first leg of Hammerfall’s European tour this winter. The tour kicks off on 26th October in Copenhagen, Denmark, and ends for the five-piece metal machine in Cologne, Germany, on 18th November. This will be the first time the legendary ‘Thundersteel’ and ‘The Privilege Of Power’ line-up of Tony Moore, Mark Reale, Mike Flyntz, Don Van Stavern and Bobby Jarzombek has played in Europe on a full tour, after the band’s celebrated one-off show at the Sweden Rock Festival in 2009.

Olly Hahn, A&R at Steamhammer, says: “Mark, Tony, Don, Bobby and Mike are really fired up once more, and ‘Immortal Soul’ will be a true successor to the legacy of ‘Thundersteel’ and ‘Privilege…’. Classic metal will never die, and who did it better than Riot?”