Swedish glam metal rockers The Poodles have somewhat unexpectedly called it a day.

The following message was posted on The Poodles‘ Facebook page on December 20, 2018: 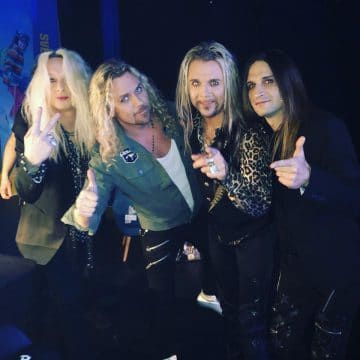 We want to take the opportunity to announce the end of The Poodles journey together as a band, and what an amazing experience it has been!

Over the last 12 years we have travelled the roads together, created beautiful music, faught, laughed, loved, and dreamed!

Alas, every ship must find a port e no matter how great the journey!

We have cherished every moment and every encounter along the way. We want to thank the many people who helped and collaborated with us, some only briefly, others for longer periods of time; all in the service of rock! You know who you are!

Also a very special THANK YOU to our fantastic fans and audiences for following us on the road, appreciating our music and for supporting us in every way! Without you, nothing of this would have been possible, we wish you all the very best!!!

Now, the future is yet to be written and we hope to see you soon, somehow, somewhere!

Salute and Farewell for now!”

Wikipedia describes The Poodles as follows:

“The Poodles was a glam metal/heavy metal band from Sweden. They are best known for their hits “Metal Will Stand Tall” and “Night of Passion”, the latter of which was played in the Swedish Melodifestivalen in 2006.

The Poodles played in the Swedish Melodifestivalen contest in 2008, this time with E-Type. In addition, they played at the Sweden Rock Festival in 2006 and 2008.”

The Poodles – Metal Will Stand Tall

The Poodles – Metal Will Stand Tall[All rights to the video belong to their legal owners.]