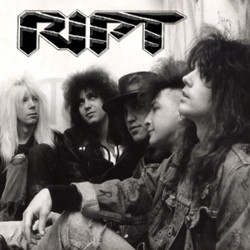 80s Hard Rock/Metal band Ript have inked a deal with Dark Star Records. Hailing from Rockford Illinois, the home of Cheap Trick, these bad boys of rock tore it up in the late 80s and early 90s with songs like “This Is Your Brain On Rock-N-Roll” and the amped up version of Elvis Presley’s “Suspicious Minds”.

The band released their self titled full length album in 1992 that included the love ballad “Nicole” and ten other fan favorites. The album sold over 15,000 copies and the band was headed for the big time. But before the band could get to the next level the ride was over.

With one of the better albums of the last decade just sitting on a shelf, it would only be a matter of time before someone would re-release this hard rock anthem. Now with a special worldwide digital release through IODA/SONY via Dark Star Records the band and their album will once again see the the light of day. And this is great news for hard rock and 80s metal fans from around the world. Ript is available now at digital retailers everywhere including iTunes.

For more info on Ript go to http://www.myspace.com/riptrockford.