New York rockers Ritualizer have released a new single titled “Speed of Sound.” You can download the track from the group’s Bandcamp page. 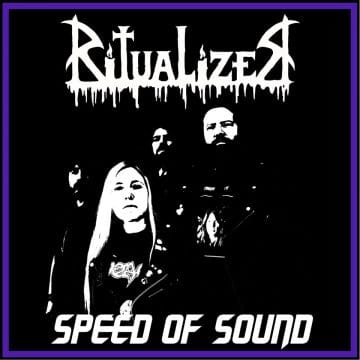 Guitarist Judson Belmont advises about the new track: “The single takes a leaner, more direct approach than the EP, trading longer song structures for a four and a half minute sonic squall that pays tribute to the glory days of [Iron] Maiden, [Judas] Priest, and Dio the only way we know how — with aggressive female vocals, frenzied ’80s metal riffage, and a reverence for speed metal and its NWOBHM [New Wave of British Heavy Metal] forebears.”

The group’s “Story” on its Facebook page indicates (with slight edits): “Brooklyn traditional metallers, Ritualizer, wasted no time crashing the sacrificial party with the November 2018 release of their debut EP “Blood Oaths”. The band, featuring vocalist PJ Berlinghof (formerly of Twilight Odyssey and Midnite Hellion), brings a barrage certain to please both classic metal fans and denizens of the shadow realm. Filling out the line-up are the infernal talents of drummer Luigi Gennaro (Phantom Isle, S.A. Adams), guitarist Judson Belmont (Orsus) and bassist Devin Lavery. After a successful run of performances, the band continues to press forward with the release of a new single and upcoming shows supporting such metal masters as Warbringer, Enforcer, and Ross the Boss. That strange shape hovering offstage may or may not be waiting to collect their souls.”