Riverdogs consisting of former Dio and Whitesnake, and current Def Leppard and Last In Line guitarist, Vivian Campbell, singer Rob Lamothe, bassist Nick Brophy and drummer Marc Danzeisen have released a video for their new song “American Dream” from their upcoming new studio album California, which will be released via Frontiers Music Srl on July 7, 2017.

The following message was posted in part on Riverdogs’ Facebook page earlier today:

“Here you go!!! The video for ‘American Dream’!! Thanks to Frontiers Music srl for making it happen and to Jamie Brown and 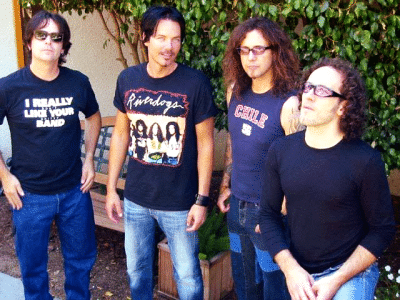 his awesome crew for getting sweaty in the desert to make it so killer! Thanks to Fernanda Alejandre for taking it all to a new level and owning that ranch!…”

Track List for California:
01. American Dream
02. The Revolution Starts Tonight
03. Something Inside
04. Golden Glow
05. You’re Too Rock And Roll
06. The Heart Is A Mindless Bird
07. Searching For A Signal
08. Welcome To The New Disaster
09. Ten Thousand Reasons
10. Catalina
11. I Don’t Know Anything