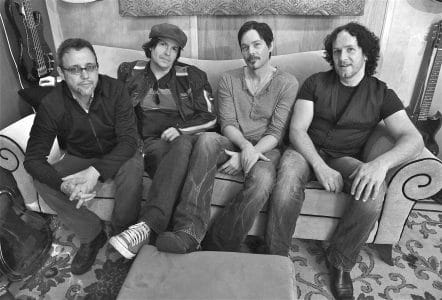 Riverdogs consisting of former Dio and Whitesnake, and current Def Leppard and Last In Line guitarist, Vivian Campbell, singer Rob Lamothe, bassist Nick Brophy and drummer Marc Danzeisen have released a mini-documentary video via Guitar World about their rehearsals and showcases leading up to their first gig together in 13 years.

“Back in December, Riverdogs re-convened in Los Angeles for a one off live performance at the first annual Frontier Records Holiday Bash. Award-winning filmmaker Sebastien Paquet was on hand to capture the band during the week of rehearsals and showcases leading up to the show, and produced this brief retrospective piece in the band’s own words.”

You can read the rest of the article on the Riverdogs at Guitar World.

Riverdogs released a new studio album California last year of which Sleaze Roxx stated in its review: “It’s an eclectic, mature recording. The lyrics at times are metaphoric, making me want to know more. Maybe when I was 16 years old, I may not have gotten this album, but as I am to turn 43 later this year, this is really how I like to enjoy my music. It’s diverse with superb musicianship. For those who enjoy this style of music, I highly recommend it.”