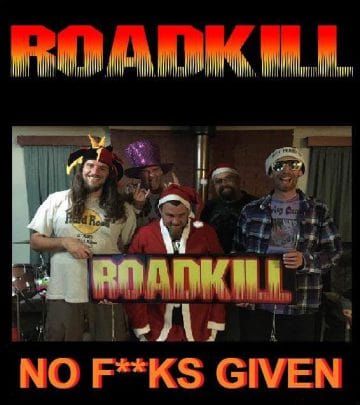 Aussie rockers Roadkill plan on starting to record a follow up to their critically acclaimed studio album E X T I N C T in mid-March. The new upcoming studio album is tentatively called No Fucks Given.

The following message was posted in part on Roadkill‘s Facebook page yesterday:

“…Tasmanian based, Australian hard rockers ROADKILL – will start the recording process, for their follow up to the bands’ current, critically acclaimed “Extinct” CD, again with Psycroptic guitarist – Joe Haley producing in mid March.

The band have been in pre-production prior and now, after the Christmas break and have up to 15 songs, to be included on the next album/CD.

ROADKILL‘s “Extinct” CD gained countless glowing reviews from some of the biggest name rock/metal magazines, as well as receiving radio airplay in numerous territories, all around the world!

Never a band to shy away from being unpolitically correct, the working title for the next opus is, “No Fucks Given“….whether this will be the albums’ legitimate title – remains to be seen?…”

Closing song off the “E X T I N C T” CD which is produced by (Psycroptic) guitarist Joe Haley. The song, Head On’ – was inspired by the head on car accident …